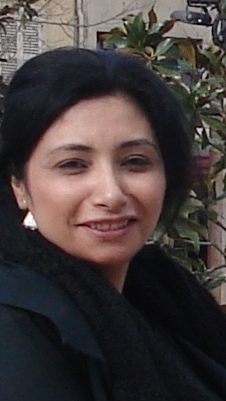 Ghada Abdel Moneim (غادة عبد المنعم) is an Egyptian writer and philosopher. One of reform advocates in Egypt , She bhas been active in enlightenment fields for twenty-five years now, and has a vision that the development considers the most important and may be the only way to reform.

Ghada was born at December 12, 1969 in house of her grandfather to her mother, in Sanbalawin City, Dakahlia, in Egypt, her father was a fighter in the Egyptian army, one of the heroes of October war and hails from a family of rural rich, where his father was "Sheikh El Ballad" of his village "ALZhaira", and one of the few who have more than twenty acres (Period of the Prior to the July Revolution in 1952). Her mother was a Lady hails from an aristocracy family, who have received rural education interspersed with French education (because she received her education at the Holy Family which is French School) and traditional rural values ( from where she lived). Both her parents belonged to assets and education of the village of ALZhaira in the province of Dakahlia, the village where Ghada lived in for six years before receiving her college education in Sohag university at Upper Egypt. As for most of her childhood was spent as a child of an Egyptian family of middle-class in Cairo where she lived as a child, and going to a public district's school while receiving her primary education (her school was called, Aziz, Egyptian pyramid).

Ghada Began writing stories in the age of nine and begin publishing poems, at seventeen. Critics described her poems as imarked by accurately imaging and concise statement, and having an ability to navigate using language within the layers of human feeling by concise eloquently and sensitive,where mixed the philosophical and intellectual views, by delicate sensitive moments. Where in overwhelming sense of loss and puzzling questions about existence.

She won Suzanne Mubarak’s Prize for Children's Literature, in 1999.

Activities as a writer

Translator, film critic, authoress, poet, children writer, novelist and short story writer in addition to being an article concerned with politics and international relations and economics.

She is currently the deputy editor of Egyptian Radio and Television Magazine.