تشاوشان أو Teoswa (الصينية المبسطة: 潮汕; پن‌ين: Cháoshàn; كانتونية يل: Chìusaan; peng'im: Dio⁵suan¹ [ti̯o˥˥꜖꜖.sũ̯ã˧˧]) is the cultural-linguistic region in the east of گوانگ‌دونگ، China that is developing into a single metropolis. This region is the origin of the Min Nan Chaoshan dialect (潮汕话). The region, also known as Chiusaan in Cantonese, consists of the cities Chaozhou, Jieyang and Shantou. It differs linguistically from the rest of Guangdong province which was historically dominated by Yue speakers, followed by Hakka and Leizhou Min speakers.[1] However, Mandarin has recently become the dominant language in the region. It is historically important as the ancestral homeland of many Thais, Singaporeans, Malaysians and Indonesians of Chinese descent.

The name "Chaoshan" (潮汕) is a contraction of the names of two of its administrative areas, the prefecture-level cities of Chaozhou (潮州) and Shantou (汕头), which have agglomerated into a single extremely dense metropolitan area and among China's most densely populated. It is Guangdong's second largest metropolitan area after the Guangzhou-centered Pearl River Delta, and part of the Southern China Coast Megalopolis. 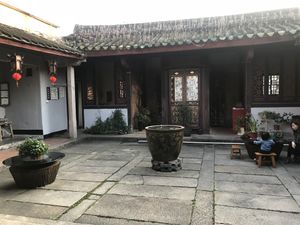 The Chaoshan region, despite being the second largest economy in Guangdong after the Pearl River Delta, is still considered quite small in comparison.[2] In recent years, due to corruption and car smuggling in the 1980s and 1990s, the central government has chosen to slow down growth of this region even though it is still designated as an SEZ (Special Economic Zone). As a result, business has slowed compared to other areas in Guangdong. In recent years Li Ka-shing has also invested heavily in the education and healthcare of this region, in response to the potential for growth.

There have been proposals to the Chinese government to amalgamate the whole region into one whole Special Economic Zone,[3] as the split of the region into 3 different cities in 1991 has rapidly slowed down the level of economic growth in the region, with the per capita GDP of Shantou reaching only US$ 4,250, whereas it was US$ 8,600 in the whole province. Since the period of 2007-2012, there has only been a 10% growth in GDP, whereas the average economic growth in the whole province has been around 15% in a similar period of time.

This is a unique area with its own culture that is quite different from its neighbours in Guangdong and the rest of China. It does, however, share similarities to the Minnan areas just north of Chaoshan in Fujian province. One of the main reasons for its uniqueness is its language, called Chaoshan (also known as Teochew). It is said that this variant of Chinese is one of the most difficult ones to master, as it has 8 tones, compared to the 6 tones found in Cantonese and the 4-5 tones found in Mandarin. Music, opera and cuisine are further characteristics that distinguish Chaoshan people from the rest of Guangdong.

The Chaoshan dialect (潮州話/潮汕話) of Min, by which the Chaoshan culture is conveyed, is considered one of the more conservative Chinese dialects, as it preserves features from ancient Chinese that have been lost in some of the other modern dialects of Chinese. It is spoken by about 10 million people in local Chaoshan and approximately 2-5 million overseas. 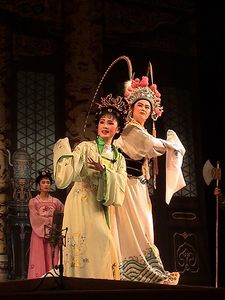 أوپرا تشاوژو (潮劇) is a traditional art form which has a history of more than 500 years and is now loved by 20 million Chaozhou natives in over 20 countries and regions. Based on the local folk dances and ballads, Chaozhou opera has formed its own style under the influence of Nanxi opera. Nanxi is one of the oldest Chinese operas that originated in the Song Dynasty. Its tunes are graceful and pleasant, full of local color. The old form of choral accompaniment still remains its special features. Clowns and females are the most distinctive characters in a Chaozhou opera, and fan-playing and acrobatic skills are more prominent than in other types of performances.

Gongfu tea (工夫茶), the "espresso" of Chinese teas with a formidable kick, which was first consumed back in the Song Dynasty, is still flourishing and remains an important part of social etiquette in Chaozhou.

At the local teahouse, tea service is often accompanied with Chaozhou music (潮州音樂). String music, the gong and drum music, the ancient music of set flutes are the traditional play forms of Chaozhou music. Chaozhou string music is made up of mostly plucked and bowed string instruments, and on some occasions, wind instruments are used. The most characteristicd instruments are the rihin (二弦), tihu (提胡) and yahu (all two-stringed bowed lutes), the sanxian, pipa, ruan, guzheng, and yangqin. The number of instruments and performers in the ensemble is flexible and depends on the availability of instruments and musicians to play them - but to have an even and balanced texture only one of each instrument is preferred. Chaozhou drum music includes the big drum and gong, the small drum and gong, the dizi set drum and dong and su drum and gong ensembles. The current Chaozhou drum music is said to be similar to the form of the Drum and Wind Music of the Han and Tang Dynasties. Chaozhou guzheng (潮州古筝) is also regarded a major genre of Southern style of Chinese guzheng.