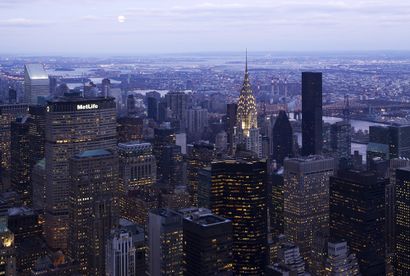 Midtown Manhattan in New York City, the largest central business district in the world. Shown is the terraced crown of the Chrysler Building lit at dawn.

A central business district (CBD) is the commercial and business center of a city. In larger cities, it is often synonymous with the city's "financial district". Geographically, it often coincides with the "city centre" or "downtown", but the two concepts are separate: many cities have a central business district located away from its commercial or cultural city centre or downtown.

The CBD is often also the "city centre" or "downtown", but this is also often not the case. Midtown Manhattan is the largest central business district in New York City and in the world; yet Lower Manhattan, commonly called Downtown Manhattan, represents the second largest distinct CBD in New York City and is geographically situated south of Midtown. For example, London's "city centre" is usually regarded as encompassing the historic City of London and the mediaeval City of Westminster, whereas the City of London and the transformed Docklands area are regarded as its two CBDs. Mexico City also has a historic city centre, the colonial-era Centro Histórico, along with two CBDs: the mid-late 20th century Paseo de la Reforma - Polanco, and the new Santa Fe.

The shape and type of a CBD almost always closely reflect the city's history. Cities with strong preservation laws and maximum building height restrictions to retain the character of the historic and cultural core will have a CBD quite a distance from the centre of the city. This is quite common for European cities such as Paris or Vienna. In cities in the New World that grew quickly after the invention of mechanised modes such as road or rail transport, a single central area or downtown will often contain most of the region's tallest buildings and act both as the CBD and the commercial and cultural city center. Increasing urbanisation in the 21st century have developed megacities, particularly in Asia, that will often have multiple CBDs scattered across the urban area. It has been said that downtowns (as understood in North America) are therefore conceptually distinct from both CBDs and city centers.[1] No two CBDs look alike in terms of their spatial shape, however certain geometric patterns in these areas are recurring throughout many cities due to the nature of centralised commercial and industrial activities.[2]