توسيع الأوعية الدموية، يُعرف أيضاً بتوسيع الأوعية الدموية البالوني وpercutaneous transluminal angioplasty (PTA), is a minimally invasive, endovascular procedure to widen narrowed or obstructed arteries or veins, typically to treat arterial atherosclerosis. A deflated balloon attached to a catheter (a balloon catheter) is passed over a guide-wire into the narrowed vessel and then inflated to a fixed size. The balloon forces expansion of the blood vessel and the surrounding muscular wall, allowing an improved blood flow. A stent may be inserted at the time of ballooning to ensure the vessel remains open, and the balloon is then deflated and withdrawn. Angioplasty has come to include all manner of vascular interventions that are typically performed percutaneously. 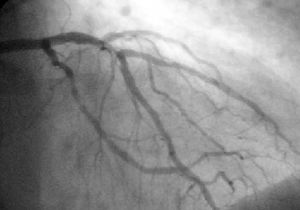 A coronary angiogram (an X-ray with radio-opaque contrast in the coronary arteries) that shows the left coronary circulation. The distal left main coronary artery (LMCA) is in the left upper quadrant of the image. Its main branches (also visible) are the left circumflex artery (LCX), which courses top-to-bottom initially and then toward the centre-bottom, and the left anterior descending (LAD) artery, which courses from left-to-right on the image and then courses down the middle of the image to project underneath the distal LCX. The LAD, as is usual, has two large diagonal branches, which arise at the centre-top of the image and course toward the centre-right of the image.

A coronary angioplasty is a therapeutic procedure to treat the stenotic (narrowed) coronary arteries of the heart found in coronary heart disease. These stenotic segments are due to the buildup of cholesterol-laden plaques that form due to atherosclerosis. A percutaneous coronary intervention is first performed.

A PCI used with stable coronary artery disease reduces chest pain but does not reduce the risk of death, myocardial infarction, or other major cardiovascular events when added to optimal medical therapy.[1]

Carotid artery stenosis is treated with angioplasty in a procedure called carotid stenting for patients at high risk for carotid endarterectomy.

Angioplasty is occasionally used to treat venous stenosis, such as stenosis of the subclavian vein caused by thoracic outlet syndrome.

Angioplasty requires an access vessel, typically the femoral or radial artery or femoral vein, to permit access to the vascular system for the wires and catheters used. If no access vessel of sufficient size and quality is available, angioplasty is contraindicated. A small vessel diameter, the presence of posterior calcification, occlusion, hematoma, or a bypass origin[مطلوب توضيح] may all make access to the vascular system too difficult. 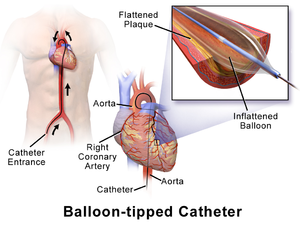 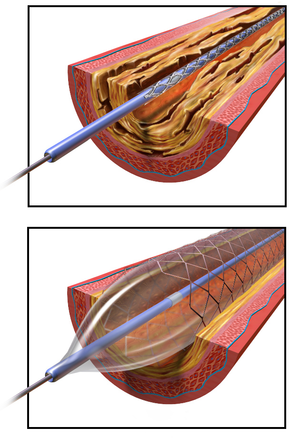 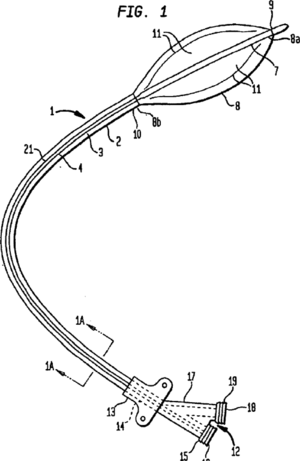 Diagram of a balloon catheter

Access to the vascular system is typically gained percutaneously (through the skin, without a large surgical incision). An introducer sheath is inserted into the blood vessel via the Seldinger technique. Fluoroscopic guidance and radiopaque contrast dye are used to guide angled wires and catheters to the region of the body to be treated. To treat a narrowing in a blood vessel, a wire is passed through the stenosis in the vessel and a balloon on a catheter is passed over the wire and into the desired position. The positioning is verified by fluoroscopy and the balloon is inflated using water mixed with contrast dye to 75 to 500 times normal blood pressure (6 to 20 atmospheres). A stent may or may not also be placed.

At the conclusion of the procedure, the balloons, wires and catheters are removed and the vessel puncture site is treated either with direct pressure or a vascular closure device.

Relative to surgery, angioplasty is a lower-risk option for the treatment of the conditions for which it is used, but there are unique and potentially dangerous risks and complications associated with angioplasty:

Angioplasty may also provide a less durable treatment for atherosclerosis and be more prone to restenosis relative to vascular bypass or coronary artery bypass grafting.[3]

After angioplasty, most patients are monitored overnight in the hospital, but if there are no complications, patients are sent home the following day.

The catheter site is checked for bleeding and swelling and the heart rate and blood pressure is monitored. Usually, patients receive medication that will relax them to protect the arteries against spasms. Patients are typically able to walk within two to six hours following the procedure and return to their normal routine by the following week.[4]

Angioplasty recovery consists of avoiding physical activity for several days after the procedure. Patients are advised to avoid heavy lifting and strenuous activities for a week.[5] Patients will need to avoid physical stress or prolonged sport activities for a maximum of two weeks after a delicate balloon angioplasty.[6]

After the initial two week recovery phase, most angioplasty patients can begin to safely return to low-level exercise. A graduated exercise program is recommended whereby patients initially perform several short bouts of exercise each day, progressively increasing to one or two longer bouts of exercise.[7] As a precaution, all structured exercise should be cleared by a cardiologist before commencing.

Patients with stents are usually prescribed an antiplatelet, clopidogrel, which is taken at the same time as acetylsalicylic acid (aspirin). These medicines are intended to prevent blood clots and they are usually taken for at least the first months after the procedure is performed. In most cases, patients are given these medicines for one year.

Patients who experience swelling, bleeding or pain at the insertion site, develop fever, feel faint or weak, notice a change in temperature or color in the arm or leg that was used or have shortness of breath or chest pain should immediately seek medical advice.

Angioplasty was first described by the US interventional radiologist Charles Dotter in 1964.[8] Dr. Dotter pioneered modern medicine with the invention of angioplasty and the catheter-delivered stent, which were first used to treat peripheral arterial disease. On January 16, 1964, Dotter percutaneously dilated a tight, localized stenosis of the subsartorial artery in an 82-year-old woman with painful leg ischemia and gangrene who refused leg amputation. After successful dilation of the stenosis with a guide wire and coaxial Teflon catheters, the circulation returned to her leg. The dilated artery stayed open until her death from pneumonia two and a half years later.[9] Charles Dotter is commonly known as the "Father of Interventional Radiology" and was nominated for the Nobel Prize in medicine in 1978.

The first percutaneous coronary angioplasty on an awake patient was performed in Zurich by the German cardiologist Andreas Gruentzig on September 16, 1977.[10]

The first coronary angioplasty with a drug delivery stent system was performed by Dr. Stertzer and Dr. Luis de la Fuente, at the Instituto Argentino de Diagnóstico y Tratamiento (English: Argentina Institute of Diagnosis and Treatment[11]) in Buenos Aires, in 1999.

Ingemar Henry Lundquist invented the over-the-wire balloon catheter that is now used in the majority of angioplasty procedures in the world.[12]