مملكة جورجيا (بالجورجية: საქართველოს სამეფო؛ بالإنگليزية: Kingdom of Georgia)، وتُعرف أيضاً بإسم الامبراطورية الجورجية,[2][3][4][5] كانت ملكية قروسطية نشأت في حوالي 1008م. It reached its Golden Age of political and economic strength during the reign of King David IV and Queen Tamar the Great from 11th to 13th centuries. At the peak of its dominance, the Kingdom's influence spanned from the south of modern-day Ukraine to the northern provinces of Iran, while also maintaining religious أملاك في الأرض المقدسة واليونان. A predominantly Christian, Georgian-speaking realm, it was the principal historical precursor of جورجيا الحالية.

Lasting for several centuries, the kingdom fell to the Mongol invasions in the 13th century, but managed to re-assert sovereignty by the 1340s. The following decades were marked by Black Death spread by the nomads, as well as numerous invasions under the leadership of Tamerlane, who devastated the country's economy, population, and urban centers. The Kingdom's geopolitical situation further worsened after the Fall of Constantinople, which effectively marked the end of the Eastern Roman Empire, Georgia's traditional ally. As a result of these processes, by the end of the 15th century Georgia turned into an isolated, fractured Christian enclave, surrounded by hostile Turco-Iranic neighbors. Renewed incursions from 1386 led to the final collapse of the kingdom into anarchy by 1466 and the mutual recognition of its constituent kingdoms of كرتلي، وكاختي وإمرتي as independent states between 1490 and 1493.

The ascendancy of the Bagrationi dynasty can be traced to the 8th century, when they came to rule Tao-Klarjeti. The restoration of the Georgian kingship begins in AD 888, when Adarnase IV of Iberia took the title of "King of Georgians". The United Kingdom of Georgia was established in 1008. In this year Bagrat III, son of Gurgen II, became the ruler of the Kingdom of Western Georgia (Kingdom of Abkhazeti), including the Principalities of Imereti, Samegrelo, Abkhazeti (أبخازيا)، گوريا and Svaneti. Bagrat's mother was Queen Gurandukht, a daughter of جورج الثاني من أبخازيا.

The Kingdom of Georgia brought about the Georgian Golden Age, which describes a historical period in the High Middle Ages, spanning from roughly the late 11th to 13th centuries, when the kingdom reached the zenith of its power and development. The period saw the flourishing of medieval Georgian architecture, painting and poetry, which was frequently expressed in the development of ecclesiastic art, as well as the creation of first major works of secular literature. It was a period of military, political, economical and cultural progress. It also included the so-called Georgian Renaissance (also called Eastern Renaissance[6]), during which various human activities, forms of craftsmanship and art, such as literature, philosophy and architecture thrived in the kingdom.[7] 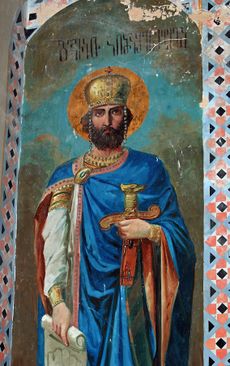 David IV of Georgia, a fresco from the Shio-Mgvime monastery

The Golden Age began with the reign of David IV ("the builder" or "the great"), the son of George II and Queen Helena, who assumed the throne at the age of 16 in a period of Great Turkish Invasions. As he came of age under the guidance of his court minister, George of Chqondidi, David IV suppressed dissent of feudal lords and centralized the power in his hands to effectively deal with foreign threats. In 1121, he decisively defeated much larger Turkish armies during the Battle of Didgori, with fleeing Seljuq Turks being run down by pursuing Georgian cavalry for several days. A huge amount of booty and prisoners were captured by David's army, which had also secured Tbilisi and inaugurated a new era of revival.[8] 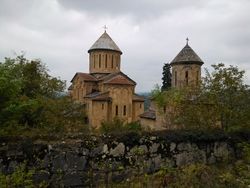 To highlight his country's higher status, he became the first Georgian king to reject the highly respected titles bestowed by the Eastern Roman Empire, Georgia’s longtime ally, indicating that Georgia would deal with its powerful friend only on a parity basis. Due to close family ties between Georgian and Byzantine royalty - Princess Martha of Georgia, aunt of David IV, was once a Byzantine Empress Consort - by 11th century as many as 16 Georgian ruling princes and kings had held Byzantine titles, David becoming the last one to do so.[9]

David IV made particular emphasis on removing the vestiges of unwanted eastern influences, which the Georgians considered forced, in favor of the traditional Christian and Byzantine overtones. As part of this effort he founded the Gelati Monastery, a UNESCO World Heritage Site, which became an important center of scholarship in the Eastern Orthodox Christian world of that time.

David also played a personal role in reviving Georgian religious hymnography, composing the Hymns of Repentance (بالجورجية: გალობანი სინანულისანი, galobani sinanulisani), a sequence of eight free-verse psalms. In this emotional repentance of his sins, David sees himself as reincarnating the Biblical David, with a similar relationship to God and to his people. His hymns also share the idealistic zeal of the contemporaneous European crusaders to whom David was a natural ally in his struggle against the Seljuks.[10] 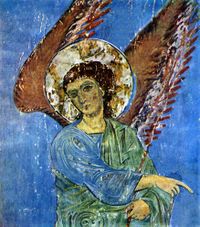 Archangel of Kintsvisi, complete with scarce natural ultramarine paint, evidenced the increasing resources of the realm

The kingdom continued to flourish under Demetrius I, the son of David. Although his reign saw a disruptive family conflict related to royal succession, Georgia remained a centralized power with a strong military, with several decisive victories against the Muslims in Ganja, gates of which were captured by Demetrius and moved as a trophy to Gelati.

A talented poet, Demetrius also continued his father's contributions to Georgia's religious polyphony. The most famous of his hymns is Thou Art a Vineyard, which is dedicated to Virgin Mary, the patron saint of Georgia, and is still sung in Georgia's churches 900 years after its creation.

Demetrius was succeeded by his son George in 1156, beginning a stage of more offensive foreign policy. The same year he ascended to the throne, George launched a successful campaign ضد سلطنة أخلاط السلجوقية. He freed the important Armenian town of Dvin from Turkish vassalage and was thus welcomed as a liberator in the area. George also continued the process of intermingling Georgian royalty with the highest ranks of the Eastern Roman Empire, testament of which is the marriage of his daughter Rusudan to Manuel Komnenos, the son of Emperor Andronikos I Komnenos.

The successes of his predecessors were built upon by Queen Tamar, daughter of George III, who became the first female ruler of Georgia in her own right and under whose leadership the Georgian state reached the zenith of power and prestige in the Middle Ages. She not only shielded much of her Empire from further Turkish onslaught but successfully pacified internal tensions, including a coup organized by her Russian husband Yury Bogolyubsky, prince of Novgorod. Additionally, she pursued policies that were considered very enlightened for her time period, such as abolishing state-sanctioned death penalty and torture.[11] 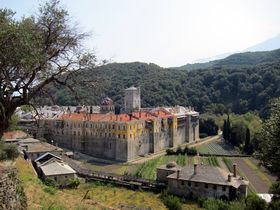 During Tamara's reign, the Kingdom patronized Georgian-built religious centers overseas, such as this Iviron Monastery

Among the remarkable events of Tamar's reign was the foundation of the empire of Trebizond on the Black Sea in 1204. This state was established in the northeast of the crumbling Byzantine Empire with the help of the Georgian armies, which supported Alexios I of Trebizond and his brother, David Komnenos, both of whom were Tamar's relatives.[12] Alexios and David were fugitive Byzantine princes raised at the Georgian court. According to Tamar's historian, the aim of the Georgian expedition to Trebizond was to punish the Byzantine emperor Alexius IV Angelus for his confiscation of a shipment of money from the Georgian queen to the monasteries of Antioch and Mount Athos. Tamar's Pontic endeavor can also be explained by her desire to take advantage of the Western European Fourth Crusade against Constantinople to set up a friendly state in Georgia's immediate southwestern neighborhood, as well as by the dynastic solidarity to the dispossessed Comnenoi.[13][14]

The country's power had grown to such extent that in the later years of Tamar's rule, the Kingdom was primarily concerned with the protection of the Georgian monastic centers in the Holy Land, eight of which were listed in Jerusalem.[15] Saladin's biographer Bahā' ad-Dīn ibn Šaddād reports that, after the Ayyubid conquest of Jerusalem in 1187, Tamar sent envoys to the sultan to request that the confiscated possessions of the Georgian monasteries in Jerusalem be returned. Saladin's response is not recorded, but the queen's efforts seem to have been successful.[16] Ibn Šaddād furthermore claims that Tamar outbid the Byzantine emperor in her efforts to obtain the relics of the True Cross, offering 200,000 gold pieces to Saladin who had taken the relics as booty at the battle of Hattin – to no avail, however.[17]

Jacques de Vitry, the French chronicler and Patriarch of Jerusalem at that time, wrote:[18]

Around the time when Mongols invaded Slavic northeast of Europe, the nomadic hordes simultaneously pushed down south to Georgia. George IV, son of Queen Tamara, put aside his preparations in support of the Fourth Crusade and concentrated on fighting the invaders, but the Mongol onslaught was too strong to overcome. Georgians suffered heavy losses in the war and the king himself was severely wounded. As a result, George became handicapped and died prematurely at the age of 31. 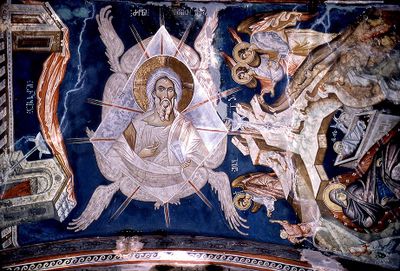 Despite setbacks at the hands of Mongols, Georgia continued to produce cultural landmarks, such as the frescoes of Ubisi by Damiane.

George's sister Rusudan assumed the throne but she was too inexperienced and her country too weakened to push out the nomads. In 1236 a prominent Mongol commander Chormaqan led a massive army against Georgia and its vassals, forcing Queen Rusudan to flee to the west, leaving eastern Georgia in the hands of noblemen who eventually made peace with the Mongols and agreed to pay tribute; those who resisted were subject to complete annihilation. The Mongol armies chose not to cross the natural barrier of Likhi Range in pursuit of the Georgian Queen, sparing western Georgia of the widespread rampages. Later, Rusudan attempted to gain support from Pope Gregory IX, but without any success. In 1243, Georgia was finally forced to acknowledge the Great Khan as its overlord.

Perhaps no Mongol invasion devastated Georgia as much as the decades of anti-Mongol struggle that took place in the country. The first anti-Mongol uprising started in 1259 under the leadership of David VI and lasted for almost thirty years. The anti-Mongol strife continued without much success under Kings Demetrius the Self-Sacrificer, who was executed by the Mongols, and David VIII.

Georgia finally saw a period of revival unknown since the Mongol invasions under King George V the Brilliant. A far-sighted monarch, George V managed to play on the decline of the Ilkhanate, stopped paying tribute to the Mongols, restored the pre-1220 state borders of Georgia, and returned the Empire of Trebizond into Georgia's sphere of influence. Under him, Georgia established close international commercial ties, mainly with the Byzantine Empire - to which George V had family ties - but also with the great European maritime republics, Genoa and Venice. George V also achieved the restoration of several Georgian monasteries in Jerusalem to the Georgian Orthodox Church and gained free passage for Georgian pilgrims to the Holy Land. The widespread use of the Jerusalem cross in Medieval Georgia - an inspiration for the modern national flag of Georgia - is thought to date to the reign of George V.[19]

One of the primary reasons of Georgian political and military decline was the bubonic plague. It was first introduced in 1366 by the soldiers of George the Brilliant returning from a military expedition in south-western Georgia against invading Osmanli tribesmen. It is said that the plague wiped out a large part, if not half of the Georgian populace.[20][21] This further weakened the integrity of the kingdom, as well as its military and logistic capabilities.

There was a period of reunion and revival under George V the Brilliant (1299–1302, 1314–1346), but the eight onslaughts of the Turco-Mongol conqueror Timur between 1386 and 1403 dealt a great blow to the Georgian kingdom. Its unity was finally shattered and, by 1490/91, the once powerful monarchy fragmented into three independent kingdoms – Kartli (central to eastern Georgia), Kakheti (eastern Georgia), and Imereti (western Georgia) – each led by the rival branches of the Bagrationi dynasty, and into five semi-independent principalities – Odishi (Mingrelia), Guria, Abkhazia, Svaneti, and Samtskhe – dominated by their own feudal clans.