Konrad Zuse (قالب:تـنطـق; 22 June 1910 Berlin - 18 December 1995 Hünfeld) was a German engineer and computer pioneer. His greatest achievement was the world's first functional program-controlled Turing-complete computer, the Z3, in 1941 (the program was stored on a punched tape). He received the Werner-von-Siemens-Ring in 1964 for the Z3.[1]

Zuse also designed the first high-level programming language, Plankalkül, first published in 1948, although this was a theoretical contribution, since the language was not implemented in his lifetime and did not directly influence early languages. One of the inventors of ALGOL (Rutishauser) wrote: "The very first attempt to devise an algorithmic language was undertaken in 1948 by K. Zuse. His notation was quite general, but the proposal never attained the consideration it deserved."

In addition to his technical work, Zuse founded one of the earliest computer businesses in 1946. This company built the Z4, which became the second commercial computer leased to ETH Zürich in 1950. Due to الحرب العالمية الثانية, however, Zuse's work went largely unnoticed in the UK and the US; possibly his first documented influence on a US company was IBM's option on his patents in 1946. In the late 1960s, Zuse suggested the concept of a Calculating Space (a computation-based universe).

There is a replica of the Z3, as well as the Z4, in the Deutsches Museum in Munich.

The Deutsches Technikmuseum Berlin in Berlin has an exhibition devoted to Zuse, displaying twelve of his machines, including a replica of the Z1, some original documents, including the specifications of Plankalkül, and several of Zuse's paintings.

Pre-WWII work and the Z1 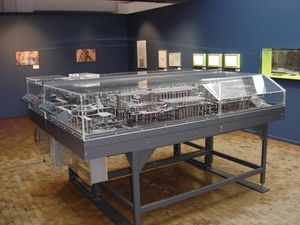 Zuse Z1 replica in the German Museum of Technology in Berlin

Born in Berlin, ألمانيا, his parents moved to Braunsberg, East Prussia in 1912, where his father worked as a postal clerk. Zuse visited the Collegium Hosianum in Braunsberg and after his family moved to Hoyerswerda, he passed his Abitur in 1928. Zuse graduated in civil engineering from the Technische Hochschule Berlin-Charlottenburg in 1935. In his engineering studies, Zuse had to perform many routine calculations by hand, which he found mind-numbingly boring. This led him to dream about performing calculations by machine.

He started as a design engineer at the Henschel aircraft factory in Berlin-Schönefeld but resigned a year later to build a program driven/programmable machine. Working in his parents' apartment in 1936, his first attempt, called the Z1, was a binary electrically driven mechanical calculator with limited programmability, reading instructions from a punched tape. In 1937 Zuse submitted two patents that anticipated a von Neumann architecture. He finished the Z1 in 1938. The Z1 never worked well, though, due to the lack of sufficiently precise mechanical parts. The Z1 and its original blueprints were destroyed during World War II.

Between 1987 and 1989, Zuse recreated the Z1, suffering a heart-attack midway through the project. It had 30,000 components, cost 800,000 DM, and required four individuals (including Zuse) to assemble it. Funding for this retrocomputing project was provided by Siemens and a consortium of five companies. 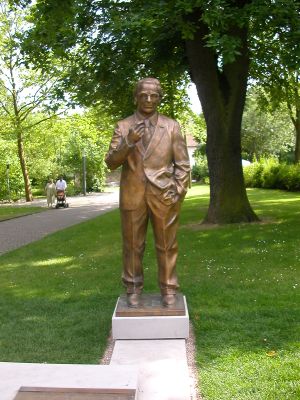 World War II made it impossible for Zuse and other German computer scientists to work with scientists in the UK and the USA, or even to stay in contact with them. In 1939, Zuse was called for military service but was able to convince the army to let him return to his computers. In 1940, he gained support from the Aerodynamische Versuchsanstalt (AVA, Aerodynamic Research Institute), which used his work for the production of glide bombs. Zuse built the Z2, a revised version of the Z1, from telephone relays. The same year, he started a company, Zuse Apparatebau (Zuse Apparatus Engineering), to manufacture his machines.

Improving on the basic Z2 machine, he built the Z3 in 1941. It was a binary 22-bit floating point calculator featuring programmability with loops but without conditional jumps, with memory and a calculation unit based on telephone relays. The telephone relays used in his machines were largely collected from discarded stock. Despite the absence of conditional jumps, the Z3 was a Turing complete computer (ignoring the fact that no physical computer can be truly Turing complete because of limited storage size). However, Turing-completeness was never considered by Zuse (who had practical applications in mind) and only demonstrated in 1998 (see History of computing hardware).

Zuse never received the support that computer pioneers in Allied countries, such as Alan Turing, got. The Z3 was financed only partly by the DVL (Deutsche Versuchsanstalt für Luftfahrt, i.e. German Experimentation-Institution for Aviation), which wanted their extensive calculations automated. A request by his co-worker Helmut Schreyer for government funding for an electronic successor to the Z3 was denied as "strategically unimportant". In 1937 Schreyer had advised Zuse to use vacuum tubes as switching elements, who at this time considered it a crazy idea ("Schnapsidee" in his own words).

Zuse's company (with the Z3) was destroyed in 1945 by an Allied attack. Fortunately, the partially finished, relay-based Z4 had been moved to a safe place earlier. Zuse designed the first high-level programming language, Plankalkül, from 1941 to 1945, although he did not publish it in its entirety until 1972. No compiler or interpreter was available for Plankalkül until a team from the Free University of Berlin implemented it in 2000.

Konrad Zuse married Gisela Brandes in January 1945 - employing a carriage, himself dressed in tailcoat and top hat and with Gisela in wedding veil, for Zuse attached importance to a noble ceremony. Their son Horst was born in November 1945. 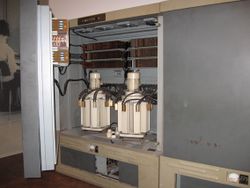 In 1946 Zuse founded one of the earliest computer companies: the Zuse-Ingenieurbüro Hopferau. Capital was raised through ETH Zürich and an IBM option on Zuse's patents.

Zuse founded another company, Zuse KG, in 1949. The Z4 was finished and delivered to the ETH Zürich, Switzerland in September 1950. At that time, it was the only working computer in continental Europe, and the second computer in the world to be sold, only beaten by the BINAC. Other computers, all numbered with a leading Z, up to Z43[2], were built by Zuse and his company. Notable are the Z11, which was sold to the optics industry and to universities, and the Z22, the first computer with a memory based on magnetic storage.[3]

By 1967, the Zuse KG had built a total of 251 computers. Due to financial problems, it was then sold to Siemens.

In 1967 Zuse also suggested that the universe itself is running on a grid of computers (digital physics); in 1969 he published the book Rechnender Raum (translated into English as Calculating Space). This idea has attracted a lot of attention, since there is no physical evidence against Zuse's thesis. Edward Fredkin (1980s), Juergen Schmidhuber (1990s), Stephen Wolfram (A New Kind of Science) and others have expanded on it.

Zuse received several awards for his work. After he retired, he focused on his hobby, painting. Zuse died on 18 December 1995 in Hünfeld, ألمانيا, near Fulda.

Since his youth Konrad Zuse had demonstrated a talent to show his vision in artistic expression. "I do not have art studies but I also do not have computer science studies" said Konrad Zuse about himself. In the following years, he created, among other things, oil paintings, chalk drawings, and linoleum cuts under the pseudonym Kuno See.

Zuse´s artwork is mostly unknown today and it´s difficult to get one of his paintings.