Born in Köprülü (now Veles, Republic of Macedonia), in the Kosovo Vilayet of the Ottoman Empire into an Albanian family, Kâzım Fikri graduated from the Ottoman military school in 1902 and completed the College of War in 1905.[2] Kâzım Özalp was involved to 31 March Incident in 1909. He was a military commander during the Balkan wars. In 1917, he was promoted to the rank of the colonel. He was one of the military commanders who organized resistance groups against the occupation of Izmir. During the Turkish War of Independence, he fought at several fronts. In 1921, Kâzım Özalp was promoted to the rank General for his success at the Battle of Sakarya. After the Kurdish Sheikh Said Rebellion was subdued, he contributed to the Report for Reform of the East, which advised to establish Inspectorates General in the eastern provinces of Turkey and crush the Kurdish elite in the region.[3] 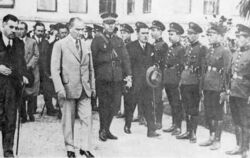 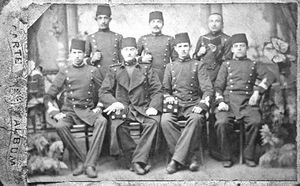 Already a member of the first term of the parliament of the newly established Republic as an MP from Balıkesir Province, Kâzım Fikri served as the Minister of Defense in several cabinets from 1921 to 1925, and later from 1935 to 1939. He was elected Speaker of the Turkish Grand National Assembly from 1924 to 1935. In 1950, he was elected to the parliament as an MP from Van Province.[4] He retired from active politics in 1954. He was rumored to have been a Bektashi possibly because of his opposition to the decision to close Bektashi centers (Tekke).[4]

Kâzım Özalp wrote his memoirs in his book ملي مجادله ("القتال الوطني"). He died on 6 June 1968 in Ankara. His remains were transferred to the Turkish State Cemetery.

قالب:Speakers of the Parliament of Turkey