Sergei Nikolayevich Gorkov (also tr. Sergey; بالروسية: Серге́й Никола́евич Горько́в; born 1 December 1968) is a Russian banker and attorney who is the chairman of the state-owned Vnesheconombank (VEB). From 2010–16, he was the deputy chairman of Sberbank, the largest bank in Russia.[2]

Gorkov was born in Gai, Orenburg Oblast, Soviet Russia, in 1968, to Nikolai Gorkov and Lyubov Gorkova. He has an older brother, Alexei Gorkov (born 1963), who joined the VEB board of directors in January 2017, and a younger sister, Antonina Konoplya (born 1971).[3] In 1994, Sergei graduated with a law degree from the Academy of the Federal Counter-Intelligence Service, which prepares members for the Foreign Intelligence Service and Federal Security Service (FSB). In 2002, he earned a master's degree in economics at the Plekhanov Russian University of Economics.[4] He speaks English and Arabic.[5] 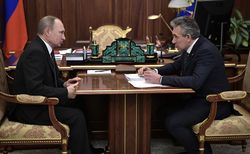 Vladimir Putin and Gorkov meet at the Kremlin, February 2017

Gorkov later worked with Bank Menatep (1994–1997) before joining the Yukos oil company and Yukos Moscow (1997–2005), all of which are now defunct. He was a vice president at Yukos, where he oversaw personnel and pensions. He was also engaged in a social outreach program, Yukos' own youth movement called "New Civilization" (بالروسية: «Новая Цивилизация»). The movement, which was extremely costly, had a mission to change Russia, and involved summer camps and young people engaging in the political system with their own party and parliament.[6]

Little is known about Gorkov's private life. Gorkov is married to Anna Nikolayevna Gorkova, with whom he has sons Alexei (born 1997) and Nikolai (born 2006), and a daughter, Polina (born 2002).[5] He lists his hobbies as cartography and history.[7]

Gorkov was awarded the Medal of the Order "For Merit to the Fatherland", II class, and the Certificate of Honor of Russia.