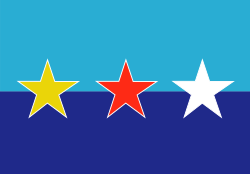 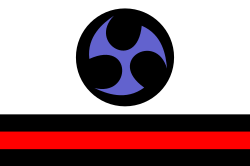 Ryukyu independence movement (琉球独立運動code: ja is deprecated , Ryūkyū Dokuritsu Undō) or Republic of the Ryukyus (Japanese: 琉球共和国, Kyūjitai: 琉球共和國, Hepburn: Ryūkyū Kyōwakoku) is a political movement for the independence of Ryukyu Islands (commonly referred to as Okinawa after the largest island [1]) from Japan.

The current political manifestation of the movement emerged in 1945, after the end of the Pacific War. Some Ryukyuan people felt, as the Allied Occupation (USMGRI 1945–1950) began, that the Ryukyus should eventually become an independent state instead of being returned to Japan. From the 1950s through to 1972 however, many pushed for reunification with the mainland, hoping that this would hasten the end of the U.S. occupation (USCAR 1950–1972)[بحاجة لمصدر]. The islands were returned to Japan on May 15, 1972 as the Okinawa Prefecture according to the 1971 Okinawa Reversion Agreement. The US-Japan Security Treaty (ANPO) signed in 1952 provides for the continuation of the American military presence in Japan, and the الولايات المتحدة continues to maintain a heavy military presence on Okinawa Island even after its reunification with Japan. This set the stage for renewed political activism for Ryukyuan independence.

The Ryukyu independence movement claims both the 1609 invasion by Satsuma Domain and the Meiji construction of the Okinawa prefecture as colonial annexations of the Ryukyu Kingdom. It is highly critical of the abuses of Ryukyuan people and territory, both in the past and in the present day (such as the use of Okinawan land to host American military bases).[2] Okinawa comprises only 0.6% of all Japanese territory, yet 75% of all United States military forces are stationed in U.S. facilities that take up 10.4% of Okinawa Prefecture i.e. 18.8-20% of Okinawa Island.[3][4] U.S military personnel have been involved in many crimes committed in Okinawa,[5][6] one of the most well-known being the 1995 Okinawa rape incident. The continued presence of the U.S. military remains a source of contention, especially against the Futenma Air Station. The U.S. military has failed to follow through on plans established in 1996 to reduce its presence. Independentists also emphasize the devastating environmental impact of the American bases accepted by Tokyo.[7][8]

The Ryukyuan people are indigenous people who live on the Ryukyu Islands, and are ethnically, culturally, and linguistically distinct from Japanese people. During the Sanzan period, Okinawa was divided into the three polities of Hokuzan, Chūzan and Nanzan. In 1429, Chūzan's chieftain Shō Hashi unified them and founded the autonomous Ryukyu Kingdom (1429–1879), with the capital at Shuri Castle. The kingdom continued to have tributary relations with the Ming Dynasty and Qing Dynasty China, a practice that was started by Chūzan in 1372–1374 and lasted until the downfall of the kingdom in the late 19th century. This tributary relationship was greatly beneficial to the kingdom as the kings received political legitimacy, while the country as a whole gained access to economic, cultural and political opportunities in Southeast Asia without any interference by China in the internal political autonomy of Ryukyu.[9]

In addition to Korea (1392), Thailand (1409) and other Southeast Asian polities, the kingdom maintained trade relations with Japan (1403), and during this period a unique political and cultural identity emerged. However, in 1609 the Japanese feudal domain of Satsuma invaded the kingdom on behalf of the first shōgun Tokugawa Ieyasu and Tokugawa shogunate (1603–1867) because the Ryukyu king Shō Nei refused to submit to the shogunate. The kingdom was forced to send a tribute to Satsuma, but was allowed to retain and continue its independence and relations and trade with China (a unique privilege, as Japan was prohibited from trading with China at the time). This arrangement was known as a "dual vassalage" status, and continued until the mid-19th century.[10]

During the Meiji period (1868–1912), the Meiji government of the Empire of Japan (1868–1947) began a process later called Ryukyu Shobun ("Ryukyu Disposition") to formally annex the kingdom into the modern Japanese Empire. Firstly established as Ryukyu Domain (1872–1879), in 1879 the kingdom-domain was abolished, established as Okinawa Prefecture, while the last Ryukyu king Shō Tai was forcibly exiled to Tokyo.[11] Previously in 1875, the kingdom was forced against its wishes to terminate its tribute relations with China, while U.S. President Ulysses S. Grant proposed a plan that would maintain an independent, sovereign Okinawa while partitioning other Ryukyuan islands between China and Japan. Japan offered China the Miyako and Yaeyama Islands in exchange for trading rights with China equal to those granted to Western states, de facto abandoning and divided the island chain for monetary profit.[12] The treaty was rejected as the Chinese court decided to not ratify the agreement. The Ryukyu's aristocratic class resisted annexation for almost two decades[13] but after the First Sino-Japanese War (1894–1895), factions pushing for Chinese and Ryukyuan sovereignty faded as China renounced its claims to the island. In the Meiji period, the government continuously and formally suppressed Ryukyuan ethnic identity, culture, tradition, and language while assimilating them as ethnic Japanese (Yamato).[14]

Since the formation of the prefecture, its relationship with the Japanese nation-state has been continually contested and changed. There were significant movements for Okinawan independence in the period following its annexation, in the period prior to and during World War II, and after World War II through to the present day. In 1945, during the WWII Battle of Okinawa, approximately 150,000 civilians were killed, consisting roughly 1/3 of the island's population.[15] Many civilians died in mass suicides forced by the Japanese military,[16] and many women were raped by both Japanese and United States military soldiers. After World War II, the Ryukyu Islands were occupied by the United States Military Government of the Ryukyu Islands (1945–1950), but the U.S. maintained control even after the 1951 Treaty of San Francisco, and its former direct administration was replaced by the USCAR government. During this period, U.S. military forcibly requisitioned private land for the building of many military facilities, with the private owners put into refugee camps, and its personnel committed thousands of crimes against civilians.[16][4]

Only twenty years later, on 15 May 1972, Okinawa and nearby islands were returned to Japan. As the Japanese had post-war political freedom and economic prosperity, the military facilities had a negative economical impact and the people felt cheated, used for the purpose of Japanese and regional security against the communist threat.[17] Despite Okinawa having been formally returned to Japan, both Japan and the United States have continued to make agreements securing the maintenance and expansion of the U.S. military bases, despite protests from the local Ryukyuan population. Although Okinawa comprises just 0.6% of Japan's total land mass, currently 75% of all U.S. military installations stationed in Japan are assigned to bases in Okinawa.[18][19]

Some philosophers, like Taira Katsuyasu, consider the establishment of Okinawa Prefecture as outright colonialism. Nomura Koya in his research argued that the Japanese mainland developed "an unconscious colonialism" in which Japanese people are not aware of how they continue to colonize Okinawa through the mainland's inclination to leave the vast majority of the United States' military presence and burden to Okinawa.[20] Eiji Oguma noted that the typical practice of "othering" used in colonial domination produced the perception of a backward "Okinawa" and "Okinawans". Some like Tomiyama Ichiro suggest that for the Ryukyuans, being a member of the modern Japanese nation-state is "nothing other than the start of being on the receiving end of colonial domination".[21]

In July 2012, Chinese newspaper Global Times suggested that Beijing would consider challenging Japan's sovereignty over Ryukyu Islands. The Chinese government has offered no endorsement of such views. Some Chinese consider that it is enough to support their independence, with professor Zhou Yongsheng warning that Ryukyu sovereignty issue will not resolve the Senkaku Islands dispute, and that Chinese involvement would destroy China-Japan relations. Professor June Teufel Dreyer emphasized that "arguing that a tributary relationship at some point in history is the basis for a sovereignty claim ... [as] many countries had tributary relationships with China" could be diplomatically incendiary. Yasukatsu Matsushima, professor who advocates independence, expressed his fear of the possibility the Ryukyu independence would be used as a tool, and perceived Chinese support as "strange" since they deny it to their own minorities.[22]

In May 2013, newspaper People's Daily published another similar article by two Chinese scholars from Chinese Academy of Social Sciences which stated that "Chinese people shall support Ryukyu's independence",[23] soon followed by Luo Yuan's comment that "The Ryukyus belong to China, never to Japan".[24] However these scholars' considerations do not necessarily represent the views of Chinese government.[25] It sparked a protest among the Japanese politicians, like Yoshihide Suga who said that Okinawa Prefecture "is unquestionably Japan's territory, historically and internationally".[23][26]

In December 2016, Japan's Public Security Intelligence Agency warned the public that China is forming ties with the Okinawan independence movement through academic exchanges, with the intent of sparking a split within Japan.[28] The report was criticized as baseless by the independence group professors asserting that the conference at Beijing University in May 2016 had no such connotations.[29] In January 2017, reports stating that independent and reliable sources have confirmed a Chinese government plan to establish a Chinese protectorate over the Ryukyus, with no assurance of Ryukyu independence. The report caused tensions between the Ryukyu independence movement and China. China denied the findings of the report.[30]

In 2005, Lim John Chuan-tiong (林泉忠), an associate professor at the جامعة الريوكيو، conducted a telephone poll of Okinawans over 18. He obtained useful replies from 1029 people. Asked whether they considered themselves Okinawan (沖縄人), Japanese (日本人), or both, the answers were 40.6%, 21.3%, and 36.5% respectively. When asked whether Okinawa should become independent if the Japanese government allowed (or did not allow) Okinawa to freely decide its future, 24.9% replied Okinawa should become independent with permission, and 20.5% in case of no permission from the Japanese government. Those who believed Okinawa should not declare independence were 58.7% and 57.4% respectively.[32][33]

In 2016, Ryūkyū Shimpō conducted another poll from October to November of Okinawans over 20, with useful replies from 1047 individuals: 2.6% favored full independence, 14% favored a federal framework with domestic authority equal to that of the national government in terms of diplomacy and security, 17.9% favored a framework with increased authority to compile budgets and other domestic authorities, while less than half supported status quo.[35]

In 2017, Okinawa Times, Asahi Shimbun and Ryukyusu Asahi Broadcasting Corporation (QAB) jointly conducted prefectural public opinion surveys for voters in the prefecture. 82% of Okinawa citizens chose "I'm glad that Okinawa has returned as a Japanese prefecture".It was 90% for respondents of the ages of 18 to 29, 86% for those in their 30s, 84% for those aged 40-59, whereas in the generation related to the return movement, the response was 72% for respondents in their 60s, 74% for those over the age of 70.[36]