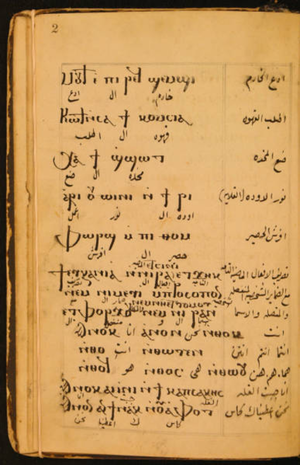 There are some differences of opinion among Coptic language scholars on the correct phonetic interpretation of the writing system of Coptic. Differences centre on how to interpret the pairs of letters ε/η and ο/ω. In Greek spelling, the first member of each pair is a short closed vowel /e, o/, and the second member is a long open vowel /ɛː, ɔː/. In some interpretations of Coptic phonology,[2] it is assumed that the length difference is primary, with ε/η e/eː and ο/ω is o/oː. Other scholars[3][4] argue for a different analysis in which ε/η and ο/ω are interpreted as e/ɛ and o/ɔ.

Dialects vary in their realization. The difference between [o] and [u] seems to be allophonic. Evidence is not sufficient to demonstrate that these are distinct vowels, and if they are, the difference has a very low functional load. For dialects that use orthographic <ει> for a single vowel, there appears to be no phonetic difference from <ι>.

Double orthographic vowels are presumed here to be long, as that makes the morphology more straightforward. (Another common interpretation is that these represented glottal stop.)

Akhmimic is conservative, close to what is reconstructed for Old Coptic.

There is no length distinction in final stressed position, but only those vowels that occur long appear there: <(ε)ι, ε, α, ο~ω, ου>.

In Sahidic, the letter ε was used for short /e/ before back fricatives, and also for unstressed schwa. It's possible there was also a distinction between short /ɛ/ and /a/, but if so the functional load was extremely low.

Bohairic did not have long vowels. /i/ was only written <ι>. As above, it's possible that /u/ and /o/ were distinct vowels rather than just allophones.

There were no doubled orthographic vowels in Mesokemic. Some representative correspondences with Sahidic are,

It's not clear if these correspondences reflect distinct pronunciations in Mesokemic, or if they're an imitation of the long Greek vowels <η, ω>.

As with the vowels, there are differences of opinion over the correct interpretation of the Coptic consonant letters, particular the letters ϫ and Ϭ. ϫ is transcribed as ⟨j⟩ in many older Coptic sources and Ϭ as ⟨ɡ⟩[2] or ⟨č⟩. Lambdin (1983) notes that the current conventional pronunciations are different from the probable ancient pronunciations: Sahidic ϫ was probably pronounced [tʲ] and Ϭ was probably pronounced [kʲ]. Reintges (2004, p. 22) suggests that ϫ was pronounced [tʃ].

Beside being found in Greek loanwords, the letters ⟨φ, θ, χ⟩ were used in native words for a sequence of /p, t, k/ plus /h/, as in ⲑⲉ = ⲧ-ϩⲉ "the-way" (f.sg.) and ⲫⲟϥ = ⲡ-ϩⲟϥ "the-snake" (m.sg). The letters did not have this use in Bohairic, which used them for single sounds.

It is possible that in addition there was a glottal stop, ʔ, that was not consistently written. Coptic does not seem to have had a glottal stop at the beginning of orthographically vowel-initial words. It's possible that vowels written double were an attempt to indicate glottal stop, rather than a long vowel, in the middle of a word. However, there is little evidence for this (e.g., Arabic loans with short vowels and glottal stop are not written with double vowels in Coptic, and Coptic words with double orthographic vowels are transcribed with long vowels rather than hamza in Arabic.)

In Late Coptic (ca. 14th century), Bohairic sounds that did not occur in Egyptian Arabic were lost. A possible shift from a tenuis-aspirate distinction to voiced-tenuis is only attested from the alveolars, the only place that Arabic has such a contrast.

Coptic pronouns are of two kinds, dependent and independent. Independent pronouns are used when the pronoun is acting as the subject of a sentence, as the object of a verb, or with a preposition. Dependent pronouns are a series of prefixes and suffixes that can attach to verbs and other nouns. Coptic verbs can therefore be said to inflect for the person, number and gender of the subject and the object: a pronominal prefix marks the subject, and a pronominal suffix marks the object, e.g. "I I'have'it the ball." When (as in this case) the subject is a pronoun, it normally isn't also expressed independently, unless for emphasis.

As in other Afroasiatic languages, gender of pronouns differ only in the second and third person singular. The following table shows the pronouns of the Sahidian dialect:

Most Coptic adjectives are actually nouns that have the attributive particle n to make them adjectival. In all stages of Egyptian, this morpheme is also used to express the genitive; for example, the Bohairic word for 'Egyptian', ⲣⲉⲙ̀ⲛⲭⲏⲙⲓ /remənkʰeːmə/, is a combination of the nominal prefix rem- (the reduced form of ⲣⲱⲙⲓ rōmi 'man'), followed by the genitive morpheme ən ('of') and finally the word for Egypt, kʰēmi.

For most transitive verbs, both absolute and nominal state grade verbs are available for non-pronominal objects. However, there is one important restriction, known as Jernstedt's rule (or the Stern-Jernstedt rule) (Jernstedt 1927): present-tense sentences cannot be used in the nominal state grade. Thus sentences in the present tense always show a pattern like the first example above (absolute state), never the second pattern (nominal state).

In general, the four grades of Coptic verb are not predictable from the root, and are listed in the lexicon for each verb. The following chart shows some typical patterns of correspondence:

Coptic has a very large number of distinct tense-aspect-mood categories, expressed by particles which are either before the verb or before the subject. The future I /na/ is a preverbal particle and follows the subject:[11]

In contrast, the perfective /a/ is a pre-subject particle:

There is some variation in the labels for the tense/aspect/mood categories. The chart below shows the labels from Reintges (2004), Lambdin (1983), Plumley (1948). (Where they agree, only one label is shown.) Each form lists the morphology found with a nonpronominal subject and a third person singular masculine pronominal subject('he'):

An approximate range of use for most of the tense/aspect/mood categories is shown in the following table:

An unusual feature of Coptic is the extensive use of a set of "second tenses", which are required in certain syntactic contexts. "Second tenses" are also called "relative tenses" in some work.[12]

Coptic has prepositions, rather than postpositions:

Pronominal objects of prepositions are indicated with enclitic pronouns:

Many prepositions have different forms before the enclitic pronouns.[13] Compare

The verbs in these sentences are in the absolute state grade,[15] which requires that its direct object be introduced with the preposition /ən, əm/. This preposition functions like accusative case.

There is also an alternative nominal state grade of the verb in which the direct object of the verb follows with no preposition: 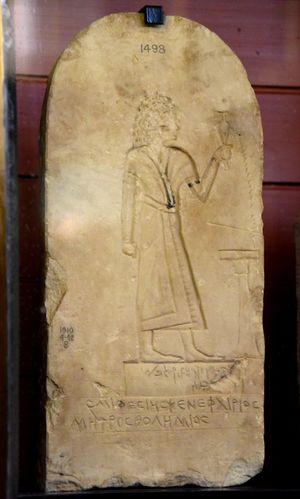 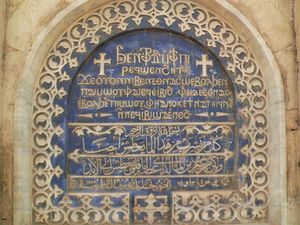 Coptic and Arabic inscriptions in an Old Cairo church

There is little written evidence of dialectal differences in the pre-Coptic phases of the Egyptian language due to the centralized nature of the political and cultural institutions of ancient Egyptian society. However, literary Old and Middle (Classical) Egyptian represent the spoken dialect of Lower Egypt around the city of Memphis, the capital of Egypt in the Old Kingdom. Later Egyptian is more representative of the dialects spoken in Upper Egypt, especially around the area of Thebes as it became the cultural and religious center of the New Kingdom.

Coptic more obviously displays a number of regional dialects that were in use from the coast of the Mediterranean Sea in northern Egypt, south into Nubia, and in the western oases. However, while many of these dialects reflect actual regional linguistic (namely phonological and some lexical) variation, they mostly reflect localized orthographic traditions with very little grammatical differences. 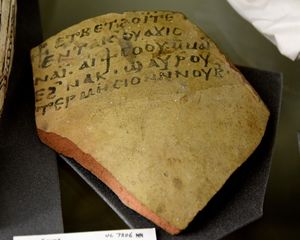 Sahidic (also known as Thebaic) is the dialect in which most known Coptic texts are written, and was the leading dialect in the pre-Islamic period. It is thought to have originally been a regional dialect from the area around Hermopolis (Coptic Ϣⲙⲟⲩⲛⲉⲓⲛ Shmounein). Around 300 it began to be written in literary form, including translations of major portions of the Bible (see Coptic versions of the Bible). By the 6th century, a standardized spelling had been attained throughout Egypt. Almost all native authors wrote in this dialect of Coptic. Sahidic was, beginning in the 9th century, challenged by Bohairic, but is attested as late as the 14th.

While texts in other Coptic dialects are primarily translations of Greek literary and religious texts, Sahidic is the only dialect with a considerable body of original literature and non-literary texts. Because Sahidic shares most of its features with other dialects of Coptic with few peculiarities specific to itself, and has an extensive corpus of known texts, it is generally the dialect studied by learners of Coptic, particularly by scholars outside of the Coptic Church.

Akhmimic was the dialect of the area around the town of Akhmim (Greek Panopolis). It flourished during the fourth and fifth centuries, after which no writings are attested. Akhmimic is phonologically the most archaic of the Coptic dialects. One characteristic feature is the retention of the phoneme /x/, which is realized as /ʃ/ in most other dialects. Similarly, it uses an exceptionally conservative writing system strikingly similar to Old Coptic.

Lycopolitan (also known as Subakhmimic and Assiutic) is a dialect closely related to Akhmimic in terms of when and where it was attested, but manuscripts written in Lycopolitan tend to be from the area of Asyut. The main differences between the two dialects seem to be graphic in nature. The Lycopolitan variety was used extensively for translations of Gnostic and Manichaean works, including the texts of the Nag Hammadi library.

The Bohairic (also known as Memphitic) dialect originated in the western Nile Delta. The earliest Bohairic manuscripts date to the 4th century, but most texts come from the 9th century and later; this may be due to poor preservation conditions for texts in the humid regions of northern Egypt. It shows several conservative features in lexicon and phonology not found in other dialects. Bohairic is the dialect used today as the liturgical language of the Coptic Orthodox Church, replacing Sahidic some time in the eleventh century. In contemporary liturgical use, there are two traditions of pronunciation, arising from successive reforms in the 19th and 20th centuries (see Coptic pronunciation reform). Modern revitalization efforts are based on this dialect.

Fayyumic (also written as Faiyumic; in older works it is often called Bashmuric) was spoken primarily in the Faiyum west of the Nile Valley. It is attested from the 3rd to the 10th centuries. It is most notable for writing ⲗ (which corresponds to /l/), where other dialects generally use ⲣ /r/ (probably corresponding to a flap [ɾ]). In earlier stages of Egyptian, the liquids were not distinguished in writing until the New Kingdom, when Late Egyptian became the administrative language. Late Egyptian orthography utilized a grapheme that combined the graphemes for /r/ and /n/ in order to express /l/. Demotic for its part indicated /l/ using a diacritic variety of /r/.

Oxyrhynchite (also known as Mesokemic or [confusingly] Middle Egyptian) is the dialect of Oxyrhynchus and surrounding areas. It shows similarities with Fayyumic and is attested in manuscripts from the fourth and fifth centuries.