The town's current name Ijevan, and its former name Karavansara (lasted until 1919), both mean "inn" (caravanserai), in Armenian and Persian, respectively.[3]

The area of modern-day Ijevan used to have many roadside inns known as caravanserais that served travelers between historic Syria and North Caucasus. On the same territory, the small village of Karavansara was founded in the 1780s during the Persian rule. However, during the days of the First Republic of Armenia in 1919, the settlement was renamed Ijevan, meaning inn or caravanserai in the Armenian language.[4]

Chamber tombs found at the centre of present-day Ijevan, as well as late Bronze Age cemetery on the left bank of Aghstev river, attest to the early occupation of the site.[5] 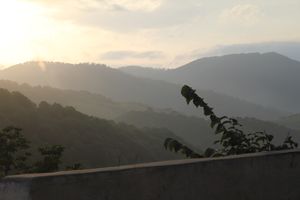 Being located on a vital rout of trade between the Levant and Northern Caucasus, the region of present-day Ijevan was home to many rest-houses and caravanserais during the Middle Ages, serving as rest-houses for the passing merchants and their caravans, mainly on the road from Tbilisi to Dvin. The remains of a medieval caravanserai stands on the banks of Aghstev river on a site called Hamam-Jala.

Under the Persian rule who had gained control over the Eastern Armenian territories since 1501-02,[6] the village of Karavansara was founded during the 1780s.[7] The territories of present-day Lori and Tavush along with the neighboring Georgia, became part of the Russian Empire in 1800-01. The territories became an official region of Russia as per the Treaty of Gulistan signed between Imperial Russia and Qajar Persia in October 1813, following the Russo-Persian War of 1804–13.[8]

In 1840, the Yelizavetpolsky Uyezd was formed and most of the territories of Tavush became part of the newly founded administrative division of the Russian Empire. Later in 1868, the Elisabethpol Governorate was established and Tavush became part of the newly formed Kazakhsky Uyezd of the governorate. Under the Russian rule, approximately 6,000 Armenian families from Karabakh were allowed to move to the valley of Aghstev river to be resettled in the region of Tavush including the territory of the village of Karavansara. The village witnessed a notable revival during the 1860s and 1870s, as a result of the new road opened between Qazax and Yerevan, passing through Karavansara. 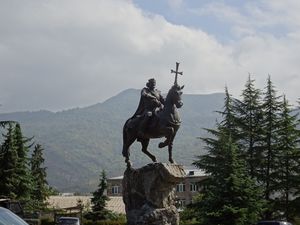 The statue of king Ashot Yerkat in Ijevan

Following the 1918 independence of Armenia, the name of Karavansara was changed to Ijevan in 1919. On 29 November 1920, Ijevan -along with Noyemberyan- was the first Armenian settlement where Soviet-Bolshevik rule was established, after being invaded by the Red Army from Soviet Azerbaijan at the north. In 1930, it became the centre of the newly formed Ijevan raion.

The first major plan of the town was adopted in 1948, revised later in 1967. In 1951, the Ijevan Wine-Brandy Factory was opened, followed by the rug and carpet factory in opened in 1959-65. With the gradual development of the industrial sector, Ijevan was given the status of a town in 1961. In 1970, it was turned into a city of republican sub-ordination of the Armenian Soviet Socialist Republic.

Following the independence of Armenia in 1991, Ijevan became the provincial centre of the newly founded Tavush Province as per the administrative reforms of 1995.[9] 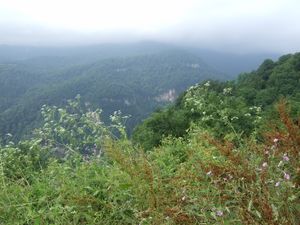 The Lastiver forest at the west of Ijevan

Surrounded by the Gugark Mountains, Ijevan is situated in the valley of Aghstev river at an average height of 755 meters above sea level.[10] The surrounding mountains are covered with thick forests, turning into alpine meadows in some areas.

This location is classified as Cfa by the Köppen climate classification.[11] The average temperature of the year is 10.6 C, in January 0 C, while in July 21.3 C. The maximum temperature registered ever in Ijevan is +37 C and the minimum is -23. The annual precipitation is 562 mm. 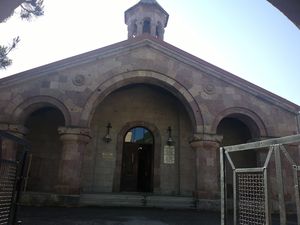 Ijevan is the largest urban community of Tavush. The majority of the town's population are ethnic Armenians who belong to the Armenian Apostolic Church. The regulating body of the church is the Diocese of Tavush, headed by Archbishop Yeznik Petrosyan.

The seat of the Diocese of Tavush is the Surp Nerses Cathedral in Ijevan opened in 1997, after the reconstruction of a former cultural centre built by the Soviets in the 1950s. The project was financed by the US-based Armenian benefactors Kevork and Berjuhi Nersesian from Boston. The other church of the town known as the Holy Saviour's was consecrated in 2012. Financed by the Ukraine-based Ghazaryan family who are natives of Ijevan, the church was built between 2009-12 on the foundations of a 19th-century church ruined during the Soviet days.[13]

The healthcare in the town is served by the Ijevan Medical Center. 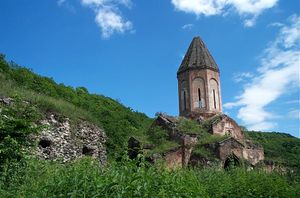 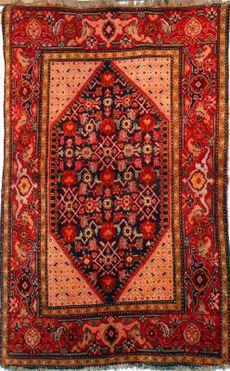 According to popular tradition, King Artavasdes I built a city on the territory of present-day Ijevan during his reign in the 2nd century BC. He gathered only attractive girls and boys from all over Armenian regions, so that later they would get married and settle in the newly established town. Thus, the citizens of modern-day Ijevan are the successors of the handsome generations formed 2000 years ago.[بحاجة لمصدر]

Ijevan and its countryside are home to several cultural heritage monuments of the Armenian Architecture, including:

Ijevan was used to host an annual symposium of sculpture between 1985 and 1990 with the presence of many experts from all over the world. Therefore, the residents of Ijevan started to call their town "the city of 100 sculptures". Currently, there are 116 sculptures erected at Ijevan sculptures garden at the centre of the town.

The ethnographic museum of Ijevan was reopened in 1999 while the art gallery was renovated in 2003.[15] The town is also served by a house of culture, a school of music, a school of arts, and an art gallery. Ijevan is a major centre for traditional Armenian handmade rugs and carpets.

The town has its local "Ijevan TV" station.[16] 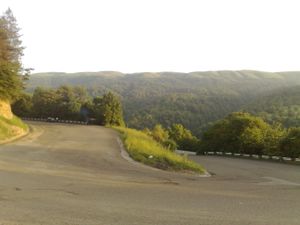 Ijevan is connected with the capital Yerevan and the rest of Armenian territories through the M-4 highway. The highway extends through the Armenia-Azerbaijan border at the northeast of the town.

Domestically, Ijevan is connected with the surrounding towns and villages of Tavush Province through a network of regional roads.

The town used to have a railway station opened at the end of the 19th century. It was an important junction between Erivan and Ganja, Azerbaijan within the Russian Empire. Following the dissolution of the Soviet Union, the station was since closed with no rail services up to the day. 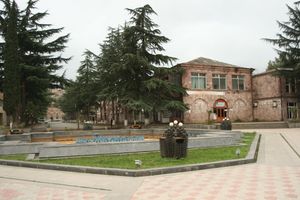 The centre of Ijevan

Ijevan is the economic centre of Tavush. During the Soviet period, the town had witnessed a remarkable industrial progress especially in the field of carpet manufacturing and wood processing. Only one of the Soviet era manufacturing is still operating in Ijevan, this being the Ijevan Wine-Brandy Factory founded in 1951[17] (particularly famous for its pomegranate wine). The Ijevan carpet weaving mill was the largest in the Caucasus and the 3rd-largest in the whole Soviet Union. After the independence of Armenia, many small industrial plants were founded, including the "Karart" stone processing plant (since 2003).

In 2014, the "Vector" company for software development was opened in Ijevan.[18]

However, unemployment rates remain high in Ijevan and the entire region. 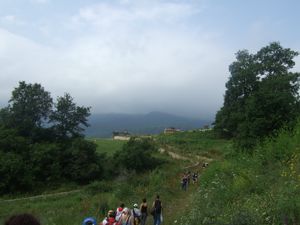 Hiking at the Ijevan sanctuary

Tavush is one of the most picturesque regions in Armenia. Nestled in the valley of Aghstev surrounded with forests and high mountains, Ijevan is more likely a forest-resort. The town did have a 200-bed high-rise hotel built in 1969 on the northern side of the main road which is now in ruins due to vandalism.

The Ijevan Sanctuary is a protected wildlife sanctuary at the west of the town, covering an area of 59 km².

The Yenokavan canyon near the village of Yenokavan village just to the north of Ijevan is among the most visited destinations in the region. It has a number of cliffs, caves, forests, rivers and waterfalls.[بحاجة لمصدر] "Anapat cave" has pre-Christian carvings that resemble Mayan and Aztec works. There are small rest houses and a modern resort in the Yenokavan canyon. 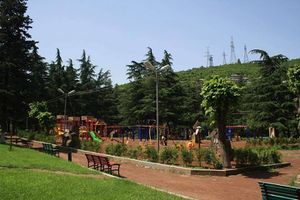 Ijevan is home to 6 public education schools and 3 pre-school kindergartens. 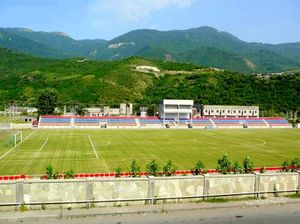 Ijevan is home to the all-seater Arnar Stadium, built in 2007 and hosted the Armenian Independence Cup final match in 2008 for the first and the only time being played outside the capital Yerevan.

FC Bentonit Ijevan was the only professional football club in the town, dissolved in 2007 due to financial difficulties. Currently, the town has an under-19 football club known as FC Nikarm, operating since 2000.

The town has a children and youth sport school run by the municipality.

Ijevan is the venue of the annual MultiForce off-road racing international competition, that attracts participants from Armenia and the neighboring countries.