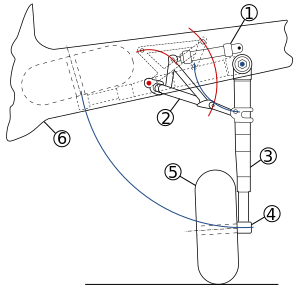 Schematic of the actuator mechanism for an aircraft landing gear.

The German scientist Reuleaux provides the definition "a machine is a combination of resistant bodies so arranged that by their means the mechanical forces of nature can be compelled to do work accompanied by certain determinate motion." In this context, his use of machine is generally interpreted to mean mechanism.

The combination of force and movement defines power, and a mechanism manages power to achieve a desired set of forces and movement.

A mechanism is usually a piece of a larger process or mechanical system. Sometimes an entire machine may be referred to as a mechanism. Examples are the steering mechanism in a car, or the winding mechanism of a wristwatch. Multiple mechanisms are machines.

From the time of Archimedes through the Renaissance, mechanisms were viewed as constructed from simple machines, such as the lever, pulley, screw, wheel and axle, wedge, and inclined plane. Reuleaux focused on bodies, called links, and the connections between these bodies called kinematic pairs, or joints.

To use geometry to study the movement of a mechanism, its links are modeled as rigid bodies. This means that distances between points in a link are assumed to not change as the mechanism moves that is, the link does not flex. Thus, the relative movement between points in two connected links is considered to result from the kinematic pair that joins them.

Lower pair: A lower pair is an ideal joint that has surface contact between the pair of elements, as in the following cases:

A kinematic diagram reduces the machine components to a skeleton diagram that emphasizes the joints and reduces the links to simple geometric elements. This diagram can also be formulated as a graph by representing the links of the mechanism as vertices and the joints as edges of the graph. This version of the kinematic diagram has proven effective in enumerating kinematic structures in the process of machine design.[1]

An important consideration in this design process is the degree of freedom of the system of links and joints, which is determined using the Chebychev–Grübler–Kutzbach criterion.

While all mechanisms in a mechanical system are three-dimensional, they can be analyzed using plane geometry, if the movement of the individual components are constrained so all point trajectories are parallel or in a series connection to a plane. In this case the system is called a planar mechanism. The kinematic analysis of planar mechanisms uses the subset of Special Euclidean group SE, consisting of planar rotations and translations, denote SE.

Select this link for an animation of a Spherical deployable mechanism.

The rotation group SO(3) is three-dimensional. An example of the three parameters that specify a spatial rotation are the roll, pitch and yaw angles used to define the orientation of an aircraft.

A mechanism in which a body moves through a general spatial movement is called a spatial mechanism. An example is the RSSR linkage, which can be viewed as a four-bar linkage in which the hinged joints of the coupler link are replaced by rod ends, also called spherical joints or ball joints. The rod ends let the input and output cranks of the RSSR linkage be misaligned to the point that they lie in different planes, which causes the coupler link to move in a general spatial movement. Robot arms, Stewart platforms, and humanoid robotic systems are also examples of spatial mechanisms.

Bennett's linkage is an example of a spatial overconstrained mechanism, which is constructed from four hinged joints. 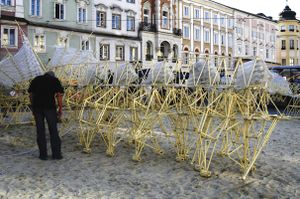 A linkage is a collection of links connected by joints. Generally, the links are the structural elements and the joints allow movement. Perhaps the single most useful example is the planar four-bar linkage. However, there are many more special linkages:

A compliant mechanism is a series of rigid bodies connected by compliant elements. These mechanisms have many advantages, including reduced part-count, reduced "slop" between joints (no parasitic motion because of gaps between parts), energy storage, low maintenance (they don't require lubrication and there is low mechanical wear), and ease of manufacture [3].

Flexure bearings (also known as flexure joints) are a subset of compliant mechanisms that produce a geometrically well-defined motion (rotation) on application of a force.

Cam follower Mechanism- Force is Applied From Follower To Cam

A cam and follower is formed by the direct contact of two specially shaped links. The driving link is called the cam (also see cam shaft) and the link that is driven through the direct contact of their surfaces is called the follower. The shape of the contacting surfaces of the cam and follower determines the movement of the mechanism. In general a cam follower mechanism's energy is transferred from cam to follower. The cam shaft is rotated and, according to the cam profile, the follower moves up and down. Now slightly different types of eccentric cam followers are also available in which energy is transferred from the follower to the cam. The main benefit of this type of cam follower mechanism is that the follower moves a little bit and helps to rotate the cam 6 times more circumference length with 70% force.

Gears are a type of mechanism.

The transmission of rotation between contacting toothed wheels can be traced back to the Antikythera mechanism of Greece and the south-pointing chariot of China. Illustrations by the renaissance scientist Georgius Agricola show gear trains with cylindrical teeth. The implementation of the involute tooth yielded a standard gear design that provides a constant speed ratio. Some important features of gears and gear trains are:

The design of mechanisms to achieve a particular movement and force transmission is known as the kinematic synthesis of mechanisms.[4] This is a set of geometric techniques that yield the dimensions of linkages, cam and follower mechanisms, and gears and gear trains to perform a required mechanical movement and power transmission.[5]