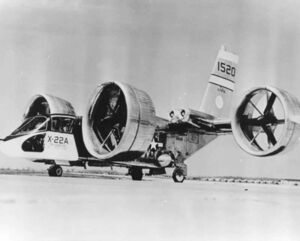 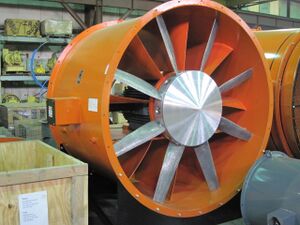 Axial flow jet fan for ventilation, photographed while being stored for future use

A ducted fan is an air moving arrangement whereby a mechanical fan, which is a type of propeller, is mounted within a cylindrical shroud or duct. The duct reduces losses in thrust from the tips of the propeller blades, and varying the cross-section of the duct allows the designer to advantageously affect the velocity and pressure of the airflow according to Bernoulli's principle. Ducted fan propulsion is used in aircraft, airships, hovercraft, and fan packs.[1]

A jet fan is a stationary ducted fan used to move air through buildings or tunnels.[2][3]

Ducted fans normally have more and shorter blades than conventional propellers and thus can operate at higher rotational speeds.[محل شك] 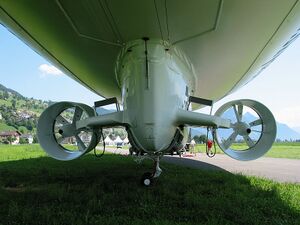 Ducted fans on an airship or dirigible

In aircraft applications, the operating speed of an unshrouded propeller is limited since tip speeds approach the sound barrier at lower speeds than an equivalent ducted fan. The most common ducted fan arrangement used in full-sized aircraft is a turbofan engine, where the power to turn the fan is provided by a gas turbine. High bypass ratio turbofan engines are used on nearly all civilian airliners, while military fighters usually make use of the better high-speed performance of a low bypass ratio turbofan with a smaller fan diameter. However, a ducted fan may be powered by any source of shaft power such as a reciprocating engine, Wankel engine, or electric motor. A kind of ducted fan, known as a fantail or by the trademark name Fenestron, is also used to replace tail rotors on helicopters. 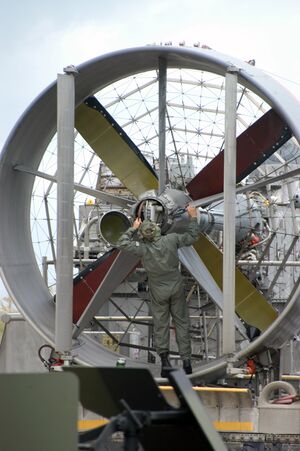 Ducted fans are favored in VTOL aircraft such as the Lockheed Martin F-35 Lightning II, and other low-speed designs such as hovercraft for their higher thrust-to-weight ratio.

In some cases, a shrouded rotor can be 94% more efficient than an open rotor. The improved performance is mainly because the outward flow is less contracted and thus carries more kinetic energy.[4]

Most types of fans used in computers contain a duct integrated into the fan assembly; the duct is also used for mechanically mounting the fan to other components. 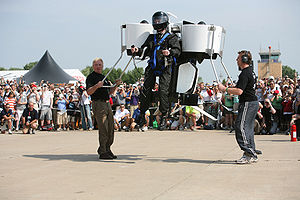 The Martin Jetpack, a personal aircraft powered by ducted fans