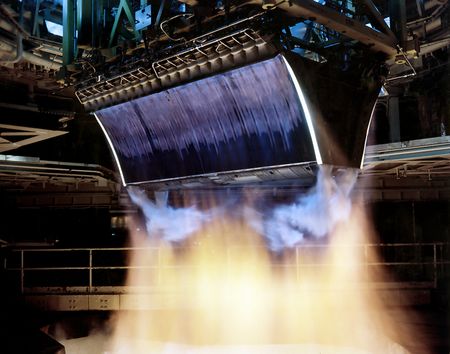 محرك النتوء الهوائي أو محرك إيروسپايك aerospike engine هو نوع من المحركات الصاروخية التي تحتفظ بكفاءتها الإيرودينامية عبر نطاق واسع من الارتفاعات.[1] It belongs to the class of altitude compensating nozzle engines. A vehicle with an aerospike engine uses 25–30% lessقالب:Definition needed fuel at low altitudes,[2] where most missions have the greatest need for thrust. Aerospike engines have been studied for a number of years and are the baseline engines for many single-stage-to-orbit (SSTO) designs and were also a strong contender for the Space Shuttle main engine. However, no such engine is in commercial production, although some large-scale aerospikes are in testing phases.[3]

The terminology in the literature surrounding this subject is somewhat confused—the term aerospike was originally used for a truncated plug nozzle with a very rough conical taper and some gas injection, forming an "air spike" to help make up for the absence of the plug tail. However, frequently, a full-length plug nozzle is now called an aerospike.

The purpose of any engine bell is to direct the exhaust of a rocket engine in one direction, generating thrust in the opposite direction. The exhaust, a high-temperature mix of gases, has an effectively random momentum distribution (i.e., the exhaust pushes in any direction it can). If the exhaust is allowed to escape in this form, only a small part of the flow will be moving in the correct direction and thus contribute to forward thrust. The bell redirects exhaust moving in the wrong direction so that it generates thrust in the correct direction. Ambient air pressure also imparts a small pressure against the exhaust, helping to keep it moving in the "right" direction as it exits the engine. As the vehicle travels upwards through the atmosphere, ambient air pressure is reduced. This causes the thrust-generating exhaust to begin to expand outside the edge of the bell. Since this exhaust begins traveling in the "wrong" direction (i.e., outward from the main exhaust plume), the efficiency of the engine is reduced as the rocket travels because this escaping exhaust is no longer contributing to the thrust of the engine. An aerospike rocket engine seeks to eliminate this loss of efficiency.[1] 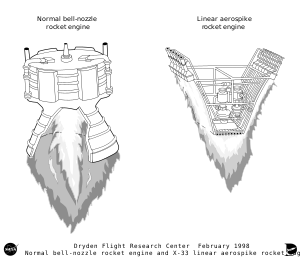 Instead of firing the exhaust out of a small hole in the middle of a bell, an aerospike engine avoids this random distribution by firing along the outside edge of a wedge-shaped protrusion, the "spike", which serves the same function as a traditional engine bell. The spike forms one side of a "virtual" bell, with the other side being formed by the outside air—thus the "aerospike".[1]

The idea behind the aerospike design is that at low altitude the ambient pressure compresses the exhaust against the spike. Exhaust recirculation in the base zone of the spike can raise the pressure in that zone to nearly ambient. Since the pressure in front of the vehicle is ambient, this means that the exhaust at the base of the spike nearly balances out with the drag experienced by the vehicle. It gives no overall thrust, but this part of the nozzle also doesn't lose thrust by forming a partial vacuum. The thrust at the base part of the nozzle can be ignored at low altitude.[1]

As the vehicle climbs to higher altitudes, the air pressure holding the exhaust against the spike decreases, as does the drag in front of the vehicle. The recirculation zone at the base of the spike maintains the pressure in that zone to a fraction of 1 bar, higher than the near-vacuum in front of the vehicle, thus giving extra thrust as altitude increases. This effectively behaves like an "altitude compensator" in that the size of the bell automatically compensates as air pressure falls.[1]

The disadvantages of aerospikes seem to be extra weight for the spike. Furthermore, the larger cooled area can reduce performance below theoretical levels by reducing the pressure against the nozzle. Aerospikes work relatively poorly between Mach 1–3, where the airflow around the vehicle has reduced the pressure, thus reducing the thrust.[4] 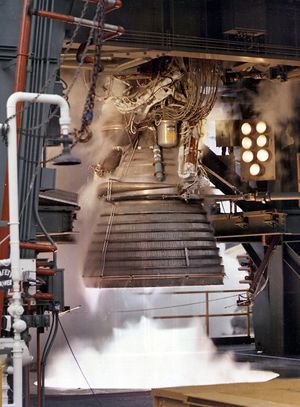 Rocketdyne conducted a lengthy series of tests in the 1960s on various designs. Later models of these engines were based on their highly reliable J-2 engine machinery and provided the same sort of thrust levels as the conventional engines they were based on; 200,000 lbf (890 kN) in the J-2T-200k, and 250,000 lbf (1.1 MN) in the J-2T-250k (the T refers to the toroidal combustion chamber). Thirty years later their work was revived for use in NASA's X-33 project. In this case the slightly upgraded J-2S engine machinery was used with a linear spike, creating the XRS-2200. After more development and considerable testing, this project was cancelled when the X-33's composite fuel tanks repeatedly failed. 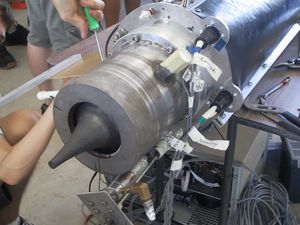 Rocketstar planned to launch its 3D-printed aerospike rocket to an altitude of 50 miles in February 2019.[5]