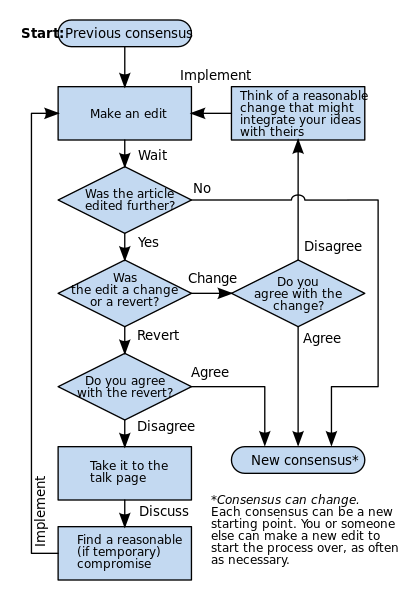 Note that consensus can only work among reasonable editors who make a good faith effort to work together to accurately and appropriately describe the different views on the subject. (e.g. insisting on insertion of an insignificant factoid into an article in opposition to many other editors has been judged a violation of consensus; see Wikipedia:Requests for arbitration/Charles Darwin-Lincoln dispute.)

It is difficult to specify exactly what constitutes a reasonable or rational position. Good editors acknowledge that positions opposed to their own may be reasonable. However, stubborn insistence on an eccentric position, with refusal to consider other viewpoints in good faith, is not justified under Wikipedia's consensus practice. (Note that in the rare case if the "eccentric" position turns out to have merit, the consensus can change.)

Even if an editor's contributions appear to be biased, keep in mind that their edits may have been made in good faith, out of a genuine desire to improve the article. Editors must, in almost all situations, assume good faith and must always remain civil.

Once established, consensus is not immutable. It is reasonable, and sometimes necessary, for the community to change its mind. A small group of editors can reach a consensual decision about an article, but when the article gains wider attention, members of the larger community of interest may then disagree, thus changing the consensus. The original group should not block further change on grounds that they already have made a decision.

This does not mean that Wikipedia ignores precedent; for example, editors should not continuously nominate an article to WP:AFD until it reaches their preferred outcome. However, an issue that was decided in the past can always be discussed again, especially if there is new information to discuss. An editor who thinks that a consensual decision is outdated may ask about it on the relevant talk page, at the Village Pump, or through a Request for Comment to see whether other editors agree. No one editor can unilaterally declare that consensus has changed.

It is the nature of the wiki to be ever-changing. New people visit every day, and through new information and new ideas, we may gain insights we did not have previously. It is important that there is a way to challenge past decisions, whether they have been reached by poll or consensus. Decisions should therefore practically never be "binding" in the sense that the decision cannot be taken back.

"Asking the other parent"

On the other hand, it is very easy to create the appearance of a changing consensus simply by asking again and hoping that a different and more sympathetic group of people will discuss the issue. This, however, is a poor example of changing consensus, and is antithetical to the way that Wikipedia works. Wikipedia's decisions are based not on the numerical fact of how many people showed up and voted a particular way. It is based on a system of good reasons. Attempts to change consensus must be based on a clear engagement with the reasons behind the previous consensus - not simply on the fact that today more people showed up supporting position A than position B.

A good sign that you have not demonstrated a change in consensus, so much as a change in the people showing up, is if few or none of the people involved in the previous discussion show up for the new one.

Asking for a consensus in a completely different "venue" or section of Wikipedia, in the hope of finding more support for a failed proposal, is known disapprovingly as forum-shopping. It's better to find the most appropriate page for discussing the topic, then ask there first and only. (This doesn't mean you can't take your proposal elsewhere if you're told you chose the wrong page for the topic.)

In fact WP's standard way of operating is a rather good illustration of what it does mean: a mixture across the community of those who are largely agreed, some who disagree but 'agree to disagree' without disaffection, those who don't agree but give low priority to the given issue, those who disagree strongly but concede that there is a community view and respect it on that level, some vocal and unreconciled folk, some who operate 'outside the law'. You find out whether you have consensus, if not unanimity, when you try to build on it.

Note: In disputes, the term consensus is often used as if it means anything from genuine consensus to majority rule to my position; it is not uncommon to see both sides in an edit war claiming a consensus for its version of the article.

While the most important part of consensus-building is to thoroughly discuss and consider all issues, it is often difficult for all members in a discussion to come to a single conclusion. In activities such as Requests for Adminship, Articles for Deletion or Requested Moves, consensus-building can be unwieldy due to the fact that more people participate than can effectively cooperate (see: Dunbar's number). These processes may have been somewhat misdesigned, in that they have not scaled cleanly. As a result, it is sometimes hard to determine what the consensus is in such processes.

To compensate for this, people first simply check if the criterion of supermajority is achieved, and on that basis make a first order assumption on how close one is to rough consensus.

Formal decision making based on vote counting is not how wikipedia works (see Wikipedia is not a majoritarian democracy) and simple vote-counting should never be the key part of the interpretation of a debate. When polling is used, it should be seen as a process of 'testing' for consensus, rather than reaching consensus.

Nevertheless, some mediators of often-used Wikipedia-space processes have placed importance on the proportion of concurring editors reaching a particular level. This issue is controversial, and there is no consensus about having numerical guidelines. That said, the numbers mentioned as being sufficient to reach supermajority vary from about 60% to over 80% depending upon the decision, with the more critical processes tending to have higher thresholds.

See the pages for RM, AFD and RFA for further discussion of such figures. The numbers are by no means fixed, but are merely statistics reflecting past decisions. Note that the numbers are not binding on the editor who is interpreting the debate, and should never be the only consideration in making a final decision. Judgment and discretion are essential to determine the correct action, and in all cases, the discussion itself is more important than the statistics.

There are a few exceptions that have superseded consensus decisions on a page.

Note on use of discussion page

While the consensus process does not require posting to the discussion page, it can be useful. Edit summaries are short and can be misinterpreted. Discussing your edit may help it attract consensus. Posting a comment before editing is the best way to avoid misunderstandings. If you are unsure about an edit someone has made, wait a reasonable amount of time to allow them to post a comment. Also, when considering edits, be sure to check the discussion page to see if there are any open or closed discussions on the area you were about to edit. But once you have checked and contributed to the discussion, don't be too timid, BE BOLD.