Bouterse is the chairman of the Surinamese political alliance Megacombinatie ("Mega combination") and the leader of the National Democratic Party (NDP), which is part of the Megacombination. On 19 July 2010, Bouterse was elected as President of Suriname with 36 of 50 parliament votes[2] and on 12 August 2010 he was inaugurated.[3]

Bouterse is a controversial figure, held responsible by some for numerous human rights violations committed during the military rule in the 1980s. Most notable was the December murders in 1982 of fifteen leading opposition figures. He was prosecuted for the murders and a trial was initiated, but the National Assembly extended amnesty to him in 2012. He is also suspected of having directed the Moiwana massacre in 1986 during the civil war by the Maroons, led by his former bodyguard.

In 2000, Bouterse was sentenced in absentia in the Netherlands to 11 years imprisonment after being convicted of trafficking 474 kilos of cocaine.[4] Bouterse always claimed innocence; he claimed that the star witness in the case, Patrick van Loon, was bribed by the Dutch government.

According to WikiLeaks cables released in 2011, Bouterse was active in the drug trade until 2006.[5] Europol has issued an arrest warrant for him. As Suriname's president, he enjoys national immunity from arrest in his country. Because Bouterse was convicted of the drug offense before his election in 2010 as Head of State, he enjoys no international immunity on these charges.[6] 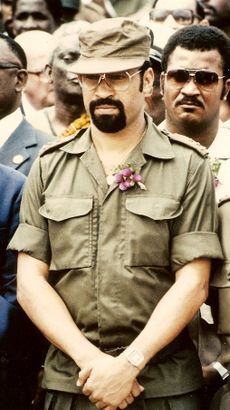 On 25 February 1980, Bouterse, Horb and fourteen other sergeants overthrew the Henck Arron government with a violent military coup d'état, now known as the Sergeants Coup. This marked the beginning of the military dictatorship that dominated Suriname from 1980 to 1991. The sergeants who accomplished this coup were known as the Groep van zestien (group of sixteen). Bouterse was the leader of the Groep van zestien. After the coup, he became chairman of the National Military Council of Suriname, which replaced the democratic government, and effectively ruler of the government.