Today, water as well as the towns and establishments surrounding the bay are collectively referred to بإسم خليج سوبك Subic Bay‏. This includes the former US naval base at SBMA, Hanjin shipyard, Olongapo city, the town of Barrio Baretto, the Municipality of سوبك, and the erstwhile US defence housing areas of Binictican and Kalayan housing, up to Morong in Bataan Province.[2]

The bay was long recognized for its deep and protected waters, but development was slow due to lack of level terrain around the bay.[1]

In 1542, Spanish conquistador Juan de Salcedo sailed into Subic Bay but no port developed there because the main Spanish naval base would be established in the nearby خليج مانيلا. When the British captured this base in 1762, the Spanish were forced to find an alternate location and Subic Bay was found to be a strategic and superb port location. In 1884, King Alfonso XII of Spain decreed that Subic was to become "a naval port and the property appertaining thereto set aside for naval purposes."[3] 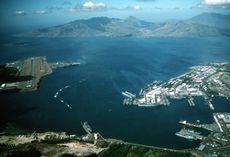 Aerial view of US Naval Base Subic Bay to the right and Naval Air Station Cubi Point to the left in 1990.

In 1899 during the Philippine–American War, the Americans captured the Spanish base and controlled the bay until 1991. During this period, the naval facilities were greatly built up and expanded, including a new naval air station that was built in the early 1950s by slicing the top half from a mountain and moving the soil to reclaim a part of Subic Bay. In 1979, the area under American control was reduced from 24,000 هكتارs (59,000 أكرs) to 6,300 هكتارs (16,000 أكرs) when the Philippines claimed sovereign rule over the base.[1][3]

Following the destruction of the 1991 Mount Pinatubo eruption, the Americans closed the base, and the area was transformed into the Subic Bay Freeport Zone.