الاسم "Genpei" (sometimes تـُرَوْمَن Gempei) comes from alternate readings of the kanji "Minamoto" (源 Gen) و "تاي‌را" (平 Hei). The conflict is also known in Japanese as the Jishō-Juei War (治承寿永の乱code: ja is deprecated , Jishō-Juei no ran),[1][2] after the two Imperial eras between which it took place.

It followed a coup d'état by the Taira in 1179 and call to arms against them led by the Minamoto in 1180. The ensuing battle of Uji took place just outside كيوتو, starting a five-year-long war, concluding with a decisive Minamoto victory in the naval battle of Dan-no-ura.

The Genpei War was the culmination of a decades-long conflict between the two aforementioned clans over dominance of the Imperial court, and by extension, control of Japan. In the Hōgen Rebellion[3] and in the Heiji Rebellion[4] of earlier decades, the Minamoto attempted to regain control from the Taira and failed.[5]:255–259

The end of the Genpei War and beginning of the Kamakura shogunate marked the rise to power of the warrior class (samurai) and the gradual suppression of the power of the emperor, who was compelled to govern without effective political or military power, being effectively reduced to a purely symbolical and ceremonial head of state, until the Meiji Restoration over 650 years later.

In addition, this war and its aftermath established red and white, the colors of the Taira and Minamoto standards, respectively, as Japan's national colors.[بحاجة لمصدر] Today, these colors can be seen on the flag of Japan, and also in banners and flags in sumo and other traditional activities. 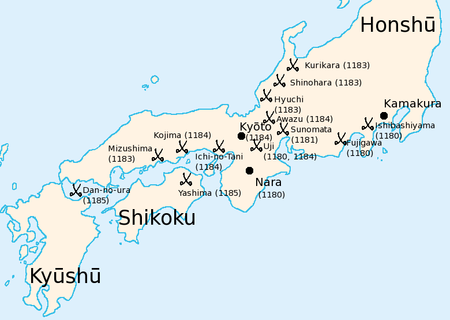 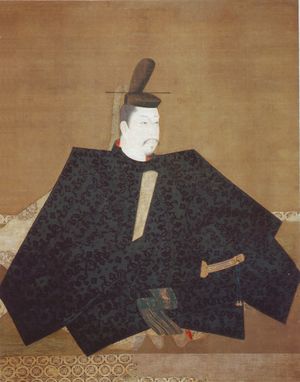 Minamoto no Yoritomo, from an 1179 hanging scroll by Fujiwara no Takanobu

The Minamoto were one of the four great clans that dominated Japanese politics during the Heian period (794-1185). They were, however, decimated by the Taira in the Heiji Rebellion of 1160. Minamoto no Yoshitomo had been the head of the clan at this time; upon his defeat at the hands of Taira no Kiyomori, two of his sons were killed and the third, Minamoto no Yoritomo, was banished. Following the call to arms of Prince Mochihito and Minamoto no Yorimasa in 1180, the clan would gather together and rise to power again. The Genpei war would see the Minamoto clan defeat the Taira and take command of the entire country. 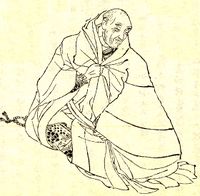 The Taira clan was one of the four great clans which dominated Japanese politics during the Heian period (794–1185). As a result of the near-total destruction of their rival clan, the Minamoto, in the Heiji Rebellion of 1160, Taira no Kiyomori, head of the clan, initiated the Genpei War at the height of his power. The end of the war, however, brought destruction to the Taira clan.

Many stories and works of art depict this conflict. The Tale of the Heike (Heike Monogatari, 平家物語) is one of the most famous, though many Kabuki and bunraku plays reproduce events of the war as well. Ichinotani futaba gunki (Chronicle of the battle of Ichi-no-Tani) by Namiki Sōsuke may be one of the more famous of these.

"Shike" by Robert Shea features a somewhat fictionalised account of the wars, as seen from the perspectives of his two main characters, the Zinja Monk Jebu, and the Noblewoman Lady Shima Taniko. The names of the two rival clans have been changed, "Minamoto" to "Muratomo" and "Taira" to "Takashi".

The Genpei War is the backdrop for much of Katherine Patterson's young adult novel, Of Nightingales That Weep.

On September 27, 2011, The Creative Assembly released a DLC pack for Total War: Shogun 2 entitled "Rise of the Samurai", which allows players to play as members of the Taira, the Minamoto, or the Fujiwara families. Through a complex system of province building, diplomacy, research, and combat, players can decide the outcome of the Genpei War for themselves.

The conflict between the Genji and Heike gangs in the 2007 Japanese Western film Sukiyaki Western Django mirrors that of the actual Genpei war, albeit "a few hundred years after."