HMS Victoria was the lead ship in her class of two battleships of the Royal Navy. On 22 June 1893, she collided with Camperdown near Tripoli, Lebanon during manoeuvres and quickly sank, taking 358 crew with her, including the commander of the British Mediterranean Fleet, Vice-Admiral Sir George Tryon. One of the survivors was executive officer of the Victoria, John Jellicoe, later commander-in-chief of the British Grand Fleet at the Battle of Jutland. 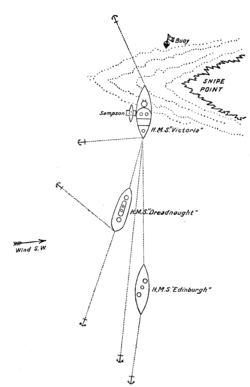 Position of ships for re-floating Victoria

On 29 January 1892, Victoria ran aground at Snipe Point near Platea on the Greek coast. Platea had been selected as a convenient friendly port for British ships to use as a base for exercises with torpedoes and mines and each ship of the Mediterranean Fleet would go there in turn during the winter. Torpedoes would be launched from fast moving ships in real battle conditions, but it was desirable to practice this in relatively shallow waters so that the torpedoes could be recovered afterwards (they were supposed to float once their motors stopped but sometimes sank). Captain Bourke had appreciated the potential difficulties of operating his ship in shallow waters, and had ordered a crew to set out a buoy offshore where the water shoaled to 60 قدم (18 م). The crew missed the shallowest point, so that Victoria ran aground at 9 عقدة (10 ميل/س; 17 كم/س) onto the rocky shoal and stuck fast. The fore end of the ship ended up 7 قدم (2.1 م) higher out of the water than would be normal as momentum drove it up onto the shoal. The ship's bottom was damaged, and three compartments flooded. The stern, however, was still in 66 قدم (20 م) of water. Admiral Tryon was notified and departed for the scene in Surprise, also ordering a dockyard tug Sampson with pumping equipment and hawsers. Hecla — a torpedo-depot ship — was already at Platea and made two attempts to tow Victoria free. These failed, but she assisted with laying anchors to hold the rear of the ship steady until further help could arrive. Phaeton, Edinburgh, Dreadnought, Scout and Humber were also called to the scene.[4] 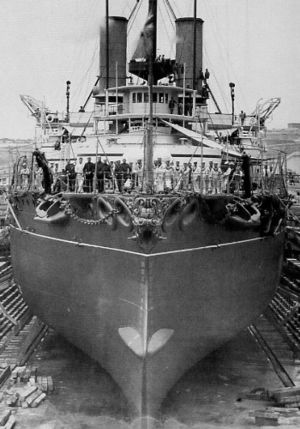 Victoria in dry dock at Malta

The British Mediterranean Fleet was one of the most powerful in the world at the time. The Royal Navy saw the Mediterranean as a vital sea route between Britain and India, under constant threat from the navies of France and Italy, and concentrated an impressive force in it. On 22 June 1893, the bulk of the fleet, 11 ironclads (eight battleships and three large cruisers), were on their annual summer exercises off Tripoli in Lebanon.

Tryon was a strict disciplinarian who believed that the best way of keeping his crews taut and efficient was by continuous fleet evolutions, which before the invention of wireless were signalled by flags, semaphore and signal lamp. He had gained a reputation as a daring and highly proficient handler of his ships. His speciality was a new system (the "TA" system) by which complex manoeuvres could be handled by only a few simple signals, but which required his ships' captains to use their initiative; a quality which had become blunted by decades of naval peace since Trafalgar, and which was unwelcome in a hierarchical navy which deified Admiral Horatio Nelson while misunderstanding what he had stood for. A taciturn and difficult man for his subordinate officers to deal with, Tryon deliberately avoided making his intentions known to them in advance, so as to train them to be adept in handling unpredictable situations.

Animation of the sinking.

By the time that both captains had ordered the engines on their respective ships reversed, it was too late, and Camperdown's ram struck the starboard side of Victoria about 12 قدم (3.7 م) below the waterline and penetrated 9 قدم (2.7 م) into it. Reversing the engines only had the effect of causing the ram to be withdrawn to let in more seawater before all of the watertight doors on Victoria had been closed. Two minutes after the collision, the ships were separated again. 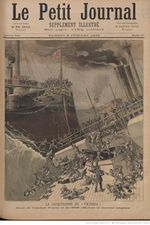 Artistic rendering of the collision between the Victoria and the Camperdown as it appeared in a French illustrated weekly.

The weather was hot.

Victoria capsized just 13 minutes after the collision, rotating to starboard with a terrible crash as her boats and anything free fell to the side and as water entering the funnels caused explosions when it reached the boilers. 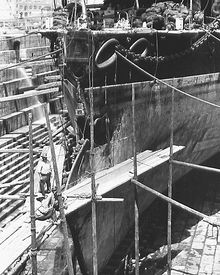 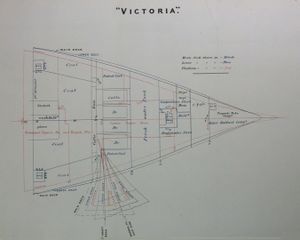 Diagram showing collision point and penetration of Camperdown into Victoria

Section showing a BL 16.25 بوصة (413 mم) gun. The weight of the guns contributed to instability of the ship and the low forecastle design