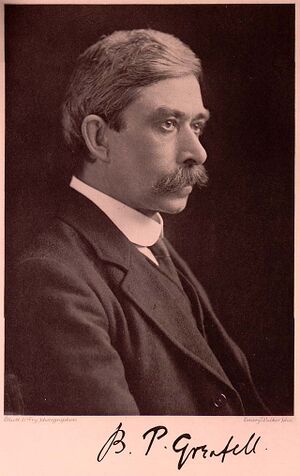 Grenfell was the son of John Granville Grenfell FGS and Alice Grenfell. He was born in برمنگهام and brought up and educated at Clifton College in Bristol, where his father taught. He obtained a scholarship in 1888 and enrolled at The Queen's College, Oxford.[1]

With his friend and colleague, آرثر سردج هنت, he took part in the archaeological dig of أوكسي‌رينخوس and discovered many ancient manuscripts known as the برديات البهنسا, including some of the oldest known copies of the New Testament and the Septuagint. Other notable finds are extensive, including previously unknown works by known classical authors. The majority of the find consists of thousands of documentary texts. Parabiblical material, such as copies of the "Logia (words) of Jesus" were also found.

In 1895, Grenfell and Hunt were the first archaeologically to explore the site of Karanis (present Kom Aushim) in Fayum.

His mother, Alice Grenfell, was living with him after his father died in 1897. She took a great interest in Egyptian Scarab shaped artifacts. She taught herself to read hieroglyphics. She published her own papers and a catalogue of the scarab collection belonging to Queen's College.[1]

In 1908, he became Professor of Papyrology at Oxford and was part of the editing team of برديات البهنسا The Oxyrynchus Papyri and other similar works. However he was ill for four years and during that time the professorship lapsed. Grenfell was cared for by his mother and he had recovered by 1913.[1]