On 9 March 2007, Musharraf asked Chaudhry to resign, which he refused to do, and was suspended from office. The resultant civil disorder led to the Lawyers' Movement, which succeeded in the restoration of Chaudhry as Chief Justice on 20 July 2007.[3] However, Musharraf declared a state of emergency in November, arresting Chaudhry as well as suspending 60 other judges from the judiciary. Following the lifting of the emergency in December and the general elections in 2008, the government was routed, and Musharraf resigned under threat of impeachment. Asif Ali Zardari succeeded Musharraf as president, but also postponed Chaudhry's restoration. This led to the Lawyers' Movement culminating in the Long March by Zardari's political rival Sharif, and the restoration of the Chaudhry-led judiciary on 22 March 2009. Chaudhry stepped down on 12 December 2013.

The movement for Chaudhry's restoration garnered world attention,[4] while his term as Chief Justice witnessed unprecedented judicial activism, including the suo motu notice of controversial privatization of the Pakistan Steel Mills, leading the case of missing persons in Balochistan, arguing and issuing orders against the New Murree project regarding as environmental catastrophe, and ruling the National Reconciliation Ordinance (NRO) as unconstitutional and irrelevant. After proceeding the notice of contempt against the Prime minister Yousaf Raza Gillani who forcefully refused to direct a letter to Swiss authorities over President's hidden assets in Swiss Banks, Chaudry retroactively discharged and ousted Gillani and his government on April 26, 2012. He retired on 12 December 2013[5] as Chief Justice.[4]

Chaudhry's legacy is described as having "repurposed a once supine judiciary as a fiercely independent force",[6] but he has also been criticized for judicial overreach and allegations of misuse of office.[7][8]

On 25 December 2015, Chaudhry announced the formation of the Pakistan Justice Democratic Critic Party headed by himself.[2] 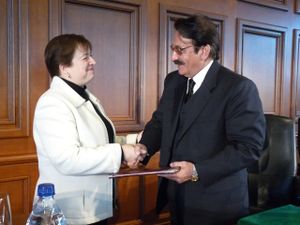 Elena Kagan, then the Dean of Harvard Law School, delivering the Medal of Freedom to Chief Justice Chaudhry 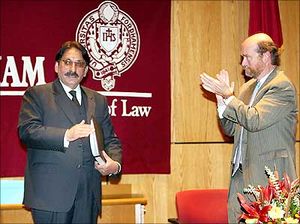 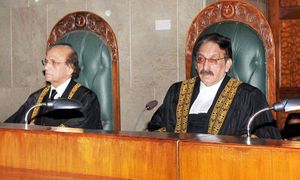 Chaudhry in full court on his last day

Chaudhry retired on 13 December 2013 as Chief Justice.[10] Justice Jilani was to succeed Justice Chaudhry as CJP.[11] In his last speech he focused on human rights and the current Supreme Court position regarding cases. He clarified that now the Supreme Court and law and order are more effective.[12]