In 1964, General Nguyễn Khánh gained control of the South Vietnamese government after General Dương Văn Minh was overthrown in a military coup. Although General Khánh was able to gain control of the military junta, he failed to garner support from the civilian population when he implemented various laws which limited the freedoms of the South Vietnamese people. He then had a falling-out with the Catholic faction within his own government, when he became increasingly reliant on the Buddhist movement to hold on to power. Consequently, on February 20, 1965, General Khánh was ousted from power and was forced to leave South Vietnam forever. The political instability in Saigon gave North Vietnamese leaders in Hanoi an opportunity to step up their military campaign in the south. They believed the South Vietnamese government was able to survive because it still had a strong military to combat the growing influence of the Viet Cong. With the summer campaign of 1965, North Vietnamese and Viet Cong forces aimed to inflict significant losses on the South Vietnamese military. In Phước Long Province, the Communist summer offensive culminated in the Đồng Xoài campaign.

The fight for Đồng Xoài began on the evening of June 9, 1965, when the Viet Cong 272nd Regiment attacked and captured the Civilian Irregular Defense Group and U.S. Special Forces camp there. In response to the sudden Viet Cong assault, the Army of the Republic of Vietnam (ARVN) Joint General Staff ordered the ARVN 1st Battalion, 7th Infantry Regiment, to retake Đồng Xoài district. They arrived on the battlefield on June 10, but were quickly overwhelmed by the Viet Cong 271st Regiment near Thuận Lợi. Later that day, Đồng Xoài was recaptured by the ARVN 52nd Ranger Battalion, which had survived an ambush while marching towards the district. On June 11, further South Vietnamese reinforcements arrived in the form of the ARVN 7th Airborne Battalion. The South Vietnamese paratroopers, while searching for survivors of the 1st Battalion in the Thuận Lợi rubber plantation, were defeated in a deadly ambush by the Viet Cong. On June 13 U.S. Army General William Westmoreland decided to insert elements of the U.S. 173rd Airborne Brigade into a major battle for the first time, because he feared the Viet Cong could secure a major base area in Phước Long Province. By that time, however, the Viet Cong had already withdrawn from the battlefield, so the U.S. paratroopers were ordered to return to base without a fight. 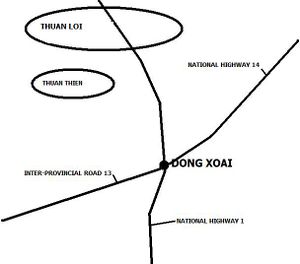 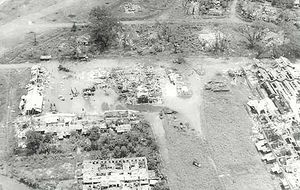 An aerial view of Đồng Xoài