The Nedelin catastrophe or Nedelin disaster was a launch pad accident that occurred on 24 October 1960 at Baikonur test range (of which Baikonur Cosmodrome is a part), during the development of the Soviet ICBM R-16. As a prototype of the missile was being prepared for a test flight, an explosion occurred when the second stage engine ignited accidentally, killing an unknown number of military and technical personnel working on the preparations. Despite the magnitude of the disaster, news of it was suppressed for many years and the Soviet government did not acknowledge the event until 1989. The disaster is named after Chief Marshal of Artillery Mitrofan Ivanovich Nedelin, who was killed in the explosion. As commanding officer of the Soviet Union's Strategic Rocket Forces, Nedelin was head of the R-16 development program.

On 23 October 1960, the prototype R-16 had been installed on launching pad 41 (بالروسية: стартовая позиция 41) awaiting final tests before launch. The missile was over 30 m long, 3.0 m in diameter and had a launch weight of 141 tons. The rocket was fueled with the hypergolic pair of UDMH as fuel and a saturated solution of dinitrogen tetroxide in nitric acid as the oxidizer — which was used because of the high boiling temperatures and hence storability of the fuel and oxidizer, despite being extremely corrosive and toxic. These risks were accounted for in the safety requirements of the launch procedures, but Nedelin's insistence on achieving a test launch ahead of the November 7 anniversary of the Bolshevik Revolution resulted in extreme schedule pressure, in a context of substantial emerging engineering difficulties.[1][2] Ultimately pre-launch tests began to overlap with launch preparations.[2]

A short circuit in the replaced main sequencer caused the second stage engine to fire while being tested before launch. This detonated the first stage fuel tanks directly below, destroying the missile in an enormous explosion. Before seeking refuge, the camera operator had remotely activated automatic cameras set around the launching pad that filmed the explosion in detail. People near the rocket were instantly incinerated; those farther away were burned to death or poisoned by the toxic fuel component vapors. Andrei Sakharov described many details—as soon as the engine fired, most of the personnel there ran to the perimeter, but were trapped inside the security fence and then engulfed in the fireball of burning fuel. The resultant explosion incinerated or asphyxiated Nedelin, a top aide, the USSR's top missile guidance designer, and over seventy other officers and engineers. Others died later of burns or poisoning.[3][2][4][1] Missile designer Mikhail Yangel and the test range commanding officer survived only because they had left to smoke a cigarette behind a bunker a few hundred meters away, but nonetheless suffered burn injuries.[3][5]

Complete secrecy was immediately imposed on the events of 24 October by Nikita Khrushchev. A news release stated that Nedelin had died in a plane crash and the families of the other engineers were advised to say their loved ones had died of the same cause. Khrushchev also ordered Leonid Brezhnev to head an investigation commission and go to the site. Among other things, the commission found that many more people were present on the launch pad than should have been — most were supposed to be safely offsite in bunkers.[بحاجة لمصدر]

According to Sergei Khrushchev, Brezhnev insisted that the commission punish no one, explaining that "The guilty have already been punished." 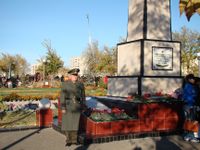 An honor guard at the tomb for those killed during the test R-16 October 24, 1960, the city of Baikonur.