During the Kosovo War, they were displaced as refugees in Albania, Serbia and شمال مقدونيا and whole Western Europe such as Germany and France. The "Ashkali" identity was created in 1999, as they tried to show their pro-Albanian stance and distinguish themselves from the Roma (Gypsies).[10]

للمزيد من المعلومات: Gypsy (term) and Romani in the Balkans

It was earlier applied to stationary Roma who settled in Albanian areas during Ottoman Empire times. The Ashkalija speak Albanian as their first language. Ashkalija often worked as blacksmiths, or manual laborers on Ottoman estates. Ashkalija are found mainly in eastern and central Kosovo. The Ashkali people claim that they have originated in Persia, now Iran, in 4th century BC (Ashkal, Gilan, Iran); however, there are no indicators for this hypothesis and it not scientifically proven. There are other theories of the Ashkali coming from Turkey in a village called Aşkale (Erzurum district of Turkey), or possibly have come from ages ago in the city of Ashkalon (Israel). Still, some believe they are travelers from Northern India (Romani) who have used the Albanian language as their mother-tongue.

A 14th-century reference to a placename (Агѹповы клѣти, Agupovy klěti) in the Rila Charter of Ivan Alexander of Bulgaria is thought to be related to the Balkan Egyptians according to some authors, such as Konstantin Josef Jireček.[12][13]

In 1990, an "Egyptian association" was formed in Ohrid, Macedonia. During the Kosovo War, Albanized Roma were displaced as refugees in Albania and the Republic of Macedonia. Many Ashkali fought in the Kosovo Liberation Army. Albanized Roma formed the ethnic group Ashkali after the end of the war in 1999, to show their pro-Albanian stance and distinguish themselves from the Roma, who had been mistakenly viewed as pro-Serbian during the war. Many Albanized Roma were also sent to refugee camps with other Roma, with whom they did not share the same language and customs.[9] As the majority of Kosovo (or Albanized) Roma, many Ashkali refugees settled in Serbia and Montenegro. The first Ashkali party (Democratic Party of the Ashkali Albanians of Kosovo) was formed in 2000 under Sabit Rrahmani, who supported Kosovo independence in the name of all Ashkali.[9]

In Kosovo, the Ashkali were aligned with Albanians before, during and after the Kosovo War.[9] However, Ashkali, along with Romani Gypsies from Kosovo, have reportedly been expelled from the area.[14]

Ashkali are predominant in the central and eastern regions of Kosovo: Ferizaj, Kosovo Polje and Lipljan. Egyptians live in western Kosovo: in Gjakova, Istok, Peja and Deçan. The Ashkali/Egyptian community of Kosovo had 98% unemployment in 2009.[15] 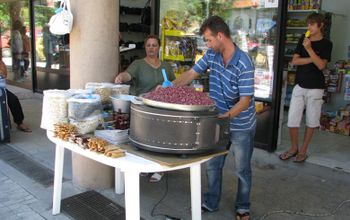 PRISTINA (Kosovo), February 22 (SeeNews) - The living situation of Kosovo's Roma, Ashkali and Egyptian communities did not improve last year and they continued to live in overcrowded informal settlements without adequate access to water and other basic services, Amnesty International said.[16]

These communities are suffering institutional dicrimination, in particular in accessing sustainable solutions for housing and employment, as internally displaced persons, the non-governmental organisation said in the 2016/2017 edition of its annual report The State of the World’s Human Rights.

The Human Rights Advisory Panel (HRAP) brought to light past several breaches of the human rights of Roma, Ashkali and Egyptian communities under the mandate of the United Nations Mission in Kosovo (UNMIK), Amnesty International said in its report which covers 159 countries and territories. I

In February 2016 HRAP found out that UNMIK subjected several families from these communities to inhuman and degrading treatment, failed to respect their rights to respect for private and family life and to health and discriminated against them on the grounds of their ethnic background.

UNMIK was established in order to provide an interim administration for Kosovo. Its mandate started in June 1999, immediately after the Kosovo war (March 1998 - June 1999). Following the declaration of independence by the Kosovo authorities on 17 February 2008 and the entry into force of the new constitution, the tasks of UNMIK have significantly been modified with its configuration changed and the number of staff reduced.