It was the year that is usually considered the final year of the Cold War that had begun in the late 1940s. During the year, the Union of Soviet Socialist Republics collapsed into fifteen sovereign republics. India also abandoned its policies of socialism and autarky and began extensive neoliberal changes to its economy in July 1991 which would increase the GDP but also economic inequality over the next two decades.[1] A U.N.-authorized coalition force from thirty-four nations fought against Iraq, which had invaded Kuwait in the previous year, 1990. The conflict would be called the Gulf War and would mark the beginning of a since-constant American military presence in the Middle East. The clash between Serbia and the other Yugoslav republics would lead into the beginning of the Yugoslav Wars, which ran through the rest of the decade.

The Japanese asset price bubble collapsed this year, leading to the Lost Years and a permanently stagnated (though still prosperous) Japanese economy.[2] 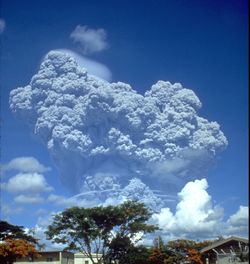 The Warsaw radio mast after its collapse on August 8.

August 19: The coup attempt in Moscow.

Map of the three Baltic states, in their flag colours. 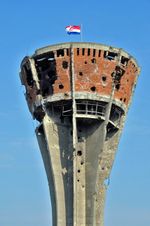 December 8: The signing of the agreement ending the USSR's existence and the founding of the Commonwealth of Independent States.

December 25: The original flag of Russia is readopted as the flag of the Russian Federation.