كاي فنغ (الصينية المبسطة: 开封؛ Kaifeng) هي prefecture-level city in east-central Henan province, China. It is one of the Eight Ancient Capitals of China, having been the capital seven times in history, and is best known for being العاصمة الصينية في أسرة سونغ الشمالية.

Around 5 million people currently live in Kaifeng's metropolitan area. Located along the Yellow River's southern bank, it borders the provincial capital of Zhengzhou to the west, Xinxiang to the northwest, Shangqiu to the east, Zhoukou to the southeast, Xuchang to the southwest, and Heze of Shandong to the northeast.

The postal romanization for the city is "Kaifeng". Its official one-character abbreviation in Chinese is 汴 (Biàn). Historically it has also been known as

The area was named "Kaifeng" after the Qin's conquest of China in the second century BC. The name literally means "opening the border" and figuratively "hidden" and "vengeance".[1] Its name was originally Qifeng (الصينية التقليدية: 啓封), but the syllable qi (Baxter-Sagart: /*kʰˤijʔ/) was changed to the essentially synonymous kai （/*Nə-[k]ʰˤəj/, /*[k]ʰˤəj/） to avoid the naming taboo of Liu Qi (Emperor Jing of Han).

The famous painting Along the River During the Qingming Festival is believed by some to portray life in Kaifeng on Qingming Festival. Several versions exist – the above is an 18th-century recreation – of an original attributed to the 12th-century artist Zhang Zeduan. 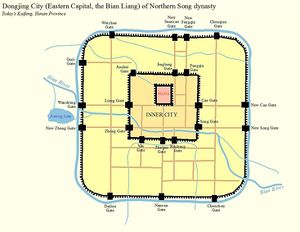 The city of Kaifeng (Dongjing, Bianliang) in Northern Song Dynasty 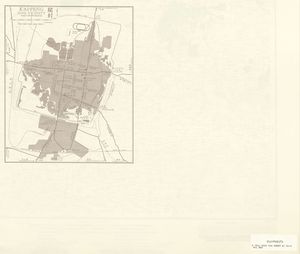 Kaifeng is one of the Eight Ancient Capitals of China. As with Beijing, there have been many reconstructions during its history.

In 364 BC during the Warring States period, the State of Wei founded a city called Daliang (大梁) as its capital in this area. During this period, the first of many canals in the area was constructed linking a local river to the Yellow River. When the State of Qin conquered the State of Wei, Kaifeng was destroyed and abandoned except for a mid-sized market town, which remained in place.

During the Han Dynasty, the city underwent some reconstruction. Kaifeng became the capital of Liu Wu (son of Han emperor Wen) when he was given the title of Liang Xiao Wang. Liu Wu restored and constructed many buildings and old city walls. Kaifeng became a center of music, art, a refuge for artists, and of splendid gardens despite the trivial political importance of the city at this period.[2]

Early in the 7th century, Kaifeng was transformed into a major commercial hub when it was connected to the Grand Canal as well as through the construction of a canal running to western Shandong.

In 781 during the Tang dynasty, a new city was reconstructed and named Bian (汴). Bian was the capital of the Later Jin (936–946), Later Han (947–950), and Later Zhou (951–960) of the Five Dynasties and Ten Kingdoms period. The Song dynasty made Bian its capital when it overthrew the Later Zhou in 960. Shortly afterwards, the city underwent further expansion.

During the Song, when it was known as Dongjing or Bianjing, Kaifeng, then the largest and most prosperous city in China, was the capital, with a population of over 400,000 living both inside and outside the city wall. Typhus was an acute problem in the city. The historian Jacques Gernet provides a lively picture of life in this period in his Daily Life in China on the Eve of the Mongol Invasion, 1250-1276, which often draws on Dongjing Meng Hua Lu, a nostalgic memoir of the city of Kaifeng.[3]

In 1049, the Youguosi Pagoda (佑國寺塔) – or Iron Pagoda as it is called today – was constructed measuring 54.7 مترs (179 ft) in height. It has survived the vicissitudes of war and floods to become the oldest landmark in this ancient city. Another Song-dynasty pagoda, Po Tower (zh), dating from 974, has been partially destroyed. 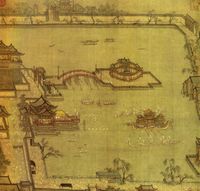 Another well-known sight was the astronomical clock tower of the engineer, scientist, and statesman Su Song (1020–1101 AD). It was crowned with a rotating armillary sphere that was hydraulically-powered (i.e. by water wheel and a water clock), yet it incorporated an escapement mechanism two hundred years before they were found in the clockworks of Europe and featured the first known endless power-transmitting chain drive.

Kaifeng reached its peak importance in the 11th century as a commercial and industrial center at the intersection of four major canals. During this time, the city was surrounded by three rings of city walls and probably had a population of between 600,000 and 700,000. It is believed that Kaifeng was the largest city in the world from 1013 to 1127.[4]

This period ended in 1127 when the city fell to Jurchen invaders during the Jingkang Incident. It subsequently came under the rule of the Jurchen Jin dynasty, which had conquered most of North China during the Jin–Song Wars.[5] While it remained an important administrative center, only the area inside the inner city wall of the early Song remained settled and the two outer rings were abandoned.

As the imperial capital of the Song, Kaifeng was conveniently situated along the Grand Canal for logistics supply but militarily vulnerable due to its position on the floodplains of the Yellow River.

Kaifeng served as the Jurchen "southern capital" from 1157 (other sources say 1161) and was reconstructed during this time.[6] The Jurchen kept their main capital further north until 1214 when they were forced to move the imperial court southwards to Kaifeng in order to flee from the onslaught of the Mongols. In 1232 they succumbed to the combined Mongol and Song forces in the Mongol siege of Kaifeng. The Mongols captured the city and in 1279 conquered all of China. During the Yuan dynasty Bianliang became the capital of Henan Jiangbei Province, which was established in 1277.

East Market Street, Kaifeng, 1910. The synagogue of the Kaifeng Jews lay beyond the row of stores on the right

The city was briefly captured around the mid-fourteenth century by the Red Turban rebels who made it their capital for ten years. They were crushed by the early Ming forces. At the beginning of the Ming dynasty in 1368, Kaifeng was made the capital of Henan province.[2]

In 1642, Kaifeng was flooded by the Ming army with water from the Yellow River to prevent the peasant rebel Li Zicheng from taking over. After this disaster, the city was abandoned again.

In 1662, during the reign of the Kangxi Emperor in the Qing dynasty, Kaifeng was rebuilt. Another reconstruction in 1843 followed flooding in 1841, shaping Kaifeng as it stands today.

On 6 June 1938, the city was occupied by the invading Japanese Imperial Army.

Kaifeng is also known for having the oldest extant Jewish community in China, the يهود كاي فنغ.

Kaifeng remained the capital of Henan province until 1954, when it was moved to Zhengzhou.

Kaifeng has a monsoon-influenced humid subtropical climate (Köppen Cwa) that borders on a humid continental climate, with four distinct seasons. Winters are cool and mostly dry while summers are hot and humid; spring is warm and sees some, but not much rainfall, while autumn weather is crisp and drier. Precipitation mainly occurs from June to September.

Downtown Kaifeng is about 55 kم (180,000 قدم) away from Zhengzhou Xinzheng International Airport (IATA: CGO, ICAO: ZHCC), which is the busiest airport in central China in terms of both passenger and cargo traffic (2017 statistics).[7]

The Zhengzhou–Kaifeng intercity railway (郑开城际铁路) started operation on 28 December 2014,[8] connecting the provincial capital Zhengzhou and Kaifeng. The railway currently terminates at Songchenglu, and is planned to be extended to Kaifeng railway station. The designed top speed is 200 كم/س (120 ميل/س).

There are 4 main coach stations in Kaifeng: 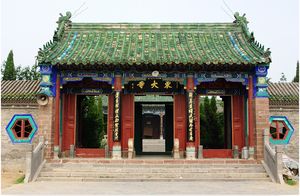 One of Kaifeng's many women's mosques 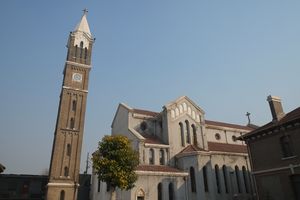 The Sacred Heart Cathedral of Kaifeng

Kaifeng is known for having the oldest extant Jewish community in China, the Kaifeng Jews.

It also has a significant Muslim enclave and is notable for its many women's mosques (nǚsì), including the oldest nǚsì in China: Wangjia Hutong Women's Mosque, which dates to 1820.[10]

There are also some active Christian churches, like Sacred-Heart of Kaifeng cathedral (开封耶稣圣心主教座堂). 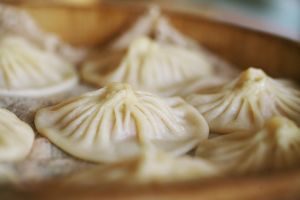 Kaifeng offers a wide range of food specialties such as steamed pie and dumplings. Particularly famous is Kaifeng's five-spice bread (wǔxiāng shāobǐng), which, like pita, can be opened and filled. In the evening, Kaifeng's streets turn into restaurants while hundreds open their stands and begin selling their food in the famous night market. People from nearby Zhengzhou often come to Kaifeng to visit family members and to enjoy the atmosphere.

The chrysanthemum is the city flower of Kaifeng. The tradition of cultivating varieties of chrysanthemums extends back 1600 years, and the scale of cultivation reached its height during the Song dynasty until its loss to the Jürchens in 1126.

The festival reached another milestone in 2012, when it celebrated its 30th birthday.[12] The opening ceremony was broadcast live on Henan Satellite TV Channel (HNTV) at the evening prime slot on 18 October 2012, which has a coverage of all Chinese cities of or above the prefecture-level classification in the Chinese administrative division.

During the festival, hundreds of chrysanthemums breeds are on show at festival venues, and the flower becomes a common features around the city. Kaifeng has been dubbed the "city of chrysanthemums".

The China Zheng-Kai International Marathon (中国郑开国际马拉松赛, Zheng-Kai stands for "Zhengzhou-Kaifeng", also abbreviated "ZK") is a sporting event hosted jointly by the Chinese Athletic Association, the general sport administration of Henan province, Zhengzhou municipal government, and the Kaifeng municipal government. It is the premier international sports competition in Henan province and one of the biggest sports competitions in the Central-West of China. ZK International Marathon is held at the end of March or beginning of April each year. The main part of the event occurs along the famous Zhengkai Express Way (郑开大道). At its launch in 2007, 5600 athletes competed. By 2012, almost 25000 athletes from 28 countries and regions have participated in the ZK International Marathon.

Kaifeng is the headquarter of the 20th Group Army of the People's Liberation Army, one of three group armies that comprise the Jinan Military Region responsible for the defense of the Yellow River Plain.

Kaifeng Air Base is a military airfield in the southern suburb of Kaifeng City. It does not provide civilian aviation service.

Kaifeng is twinned with:[13]