Signaling proteins are also important in neural plate development, and aid in differentiating the tissue destined to become the neural plate. Examples of such proteins include bone morphogenetic proteins and cadherins. Expression of these proteins is essential to neural plate folding and subsequent neural tube formation. 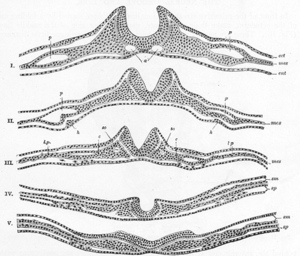 In primary neurulation, the layer of ectoderm divides into three sets of cells: the neural tube (future brain and spinal cord), epidermis (skin), and neural crest cells (connects epidermis and neural tube and will migrate to make neurons, glia, and skin cell pigmentation).[1]

During the stage of neural plate formation the embryo consists of three cell layers: the ectoderm that eventually forms the skin and neural tissues, the mesoderm that forms muscle and bone, and the endoderm that will form the cells lining the digestive and respiratory tracts. The progenitor cells that make up the precursors to neural tissues in the neural plate are called neuroepithelial cells. 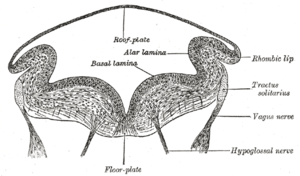 Bending and Convergence of the Neural Plate

Low pSMAD 1, 5, 8 levels allow a greater mobility at the median hinge point than in lateral neural plate cells.[10] This flexibility allows for the pivoting and hinging that allows the buckling and lifting of the neural plate when formatting the neural tube. The neural plate has to be rigid enough for morphogenic movements to occur while being flexible enough to undergo shape and position changes for the transformation to the neural tube.

The neural tube closes differently in various species, the distinctions between humans and chickens being some of the most studied. In humans, the neural tube fuses together from a central region of the embryo and moves outwards. In chickens, neural tube closure begins at the future midbrain region and it closes in both directions.[1] In birds and mammals, the closure does not occur at the same time.

In newt and general amphibian embryos, cell division is not a driving role in morphogenesis. Newt embryo cells are much larger and exhibit egg pigmentation to distinguish cells from each other. The newt neural plate doubles in length, decreases in apical width, and increases in thickness.[5] The plate edges rise dorsally and fold toward the midline to form the neural tube. The apical surface area decreases.

In chicken embryos, while the neural plate increases in length and decreases in apical width, the thickness of the plate does not change drastically. As the neural plate progresses through the Hamburger-Hamilton stages, the plate thickens until about HH6-7, when the neural plate begins to fold into tube form. The apical surface area increases during neurulation, unlike amphibian embryos.[5] In mouse embryos, there is a large convex-shaped curve to each side of the middle of the plate. This curve has to be reversed as the plate rolls together to form the neural tube.[5]

Research on the neural plate began in earnest by looking into the determination of the ectoderm and its commitment to the neuronal path. With the development of research and laboratory techniques there have been major advances in the study of neurulation and the development and role of the neural plate in a growing embryo. The use of such techniques vary with the stage of development and overall research goals, but include such methods as cell labeling and grafting.[11]

The process of in situ hybridization (ISH) follows the labeling of a DNA or RNA sequence to serve as an antisense mRNA probe, complementary to a sequence of mRNA within the embryo. Labeling with a fluorescent dye or radioactive tag allows for the visualization of the probe and their location within the embryo. This technique is useful as it reveals specific areas of gene expression in a tissue as well as throughout an entire embryo through whole-mount in situ hybridization.[12] This technique is often used in determination of gene expression necessary for the proper development of the embryo. Marking certain genes in a developing embryo allows for the determination of the exact time and place in which the gene is activated, offering information in the role of the particular gene in development.

Cell grafting in the early stages of embryo development has provided crucial information on cell fates and the processes of determination. Grafting at specific stages of neurulation has advanced research on the signaling necessary for the proper development of the neural plate and other structures. The grafting of the ectoderm and neural structures is very specialized and delicate procedure, requiring the removal and marking of a desired group of cells, followed by their transplantation, for example, into a new area of the embryo.[14]

Grafting experiments done in Xenopus and chicken embryos show the neural plate's capability to induce other regions of cells, including the pre-placodal region, a group of ectodermal cells essential to the function of sensory organs.[15]