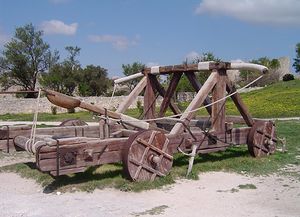 While there were numerous instances of military support for scientific work before the 20th century, these were typically isolated instances; knowledge gained from technology was generally far more important for the development of science than scientific knowledge was to technological innovation.[1] Thermodynamics, for example, is a science partly born from military technology: one of the many sources of the first law of thermodynamics was Count Rumford’s observation of the heat produced by boring cannon barrels.[2] Mathematics was important in the development of the Greek catapult and other weapons,[3] but analysis of ballistics was also important for the development of mathematics, while Galileo tried to promote the telescope as a military instrument to the military-minded Republic of Venice before turning it to the skies while seeking the patronage of the Medici court in Florence.[4] In general, craft-based innovation, disconnected from the formal systems of science, was the key to military technology well into the 19th century.

Even craft-based military technologies were not generally produced by military funding. Instead, craftsmen and inventors developed weapons and military tools independently and actively sought the interest of military patrons afterward.[5] Following the rise of engineering as a profession in the 18th century, governments and military leaders did try to harness the methods of both science and engineering for more specific ends, but frequently without success. In the decades leading up to the French Revolution, French artillery officers were often trained as engineers, and military leaders from this mathematical tradition attempted to transform the process of weapons manufacture from a craft-based enterprise to an organized and standardized system based on engineering principles and interchangeable parts (pre-dating the work of Eli Whitney in the U.S.). During the Revolution, even natural scientists participated directly, attempting to create “weapons more powerful than any we possess” to aid the cause of the new French Republic, though there were no means for the revolutionary army to fund such work.[6] Each of these efforts, however, was ultimately unsuccessful in producing militarily useful results. A slightly different outcome came from the longitude prize of the 18th century, offered by the British government for an accurate method of determining a ship's longitude at sea (essential for the safe navigation of the powerful British navy): intended to promote—and financially reward—a scientific solution, it was instead won by a scientific outsider, the clockmaker جون هاريسون.[7] However, the naval utility of astronomy did help increase the number of capable astronomers and focus research on developing more powerful and versatile instruments.

Through the 19th century, science and technology grew closer together, particularly through electrical and acoustic inventions and the corresponding mathematical theories. The late 19th and early 20th centuries witnessed a trend toward military mechanization, with the advent of repeating rifles with smokeless powder, long-range artillery, high explosives, machine guns, and mechanized transport along with telegraphic and later wireless battlefield communication. Still, independent inventors, scientists and engineers were largely responsible for these drastic changes in military technology (with the exception of the development of battleships, which could only have been created through organized large-scale effort).[8]

Historian Paul Forman, in his seminal 1987 article, proposed that not only had military funding of science greatly expanded the scope and significance of American physics, it also initiated "a qualitative change in its purposes and character."[9] Historians of science were beginning to turn to the Cold War relationship between science and the military for detailed study, and Forman's “distortionist critique” (as Roger Geiger has described it) served to focus the ensuing debates.[10] Forman and others (e.g., Robert Seidel, Stuart Leslie, and for the history of the social sciences, Ron Robin) view the influx of military money and the focus on applied rather than basic research as having had, at least partially, a negative impact on the course of subsequent research. In turn, critics of the distortionist thesis, beginning with Daniel Kevles, deny that the military "seduced American physicists from, so to speak, a 'true basic physics'."[11] Kevles, as well as Geiger, instead view the effects of military funding relative to such funding simply being absent—rather than put to alternate scientific use.[12] Most recent scholarship has moved toward a tempered version of Forman's thesis, in which scientists retained significant autonomy despite the radical changes brought about by military funding.[13]