On 11 March, there were small protests in Sheffield outside the Liberal Democrat spring conference venue.

التحضيرات لاحتجاج 26 مارس broke into 61 Curzon Street in London and occupied the building, calling it a "meeting place".[2] 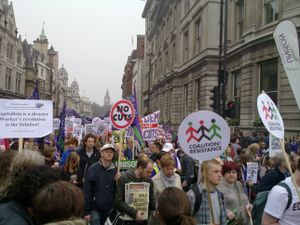 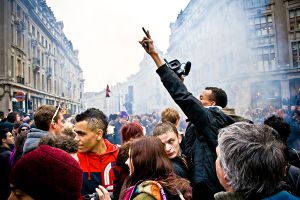 Protesters threw smoke bombs and paint at many buildings along the route, including the Oxford Street branch of Topshop (just off shot) 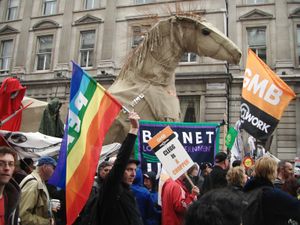 Protesters carrying models of the Four Horsemen of the Apocalypse.

Logo of the March for the Alternative 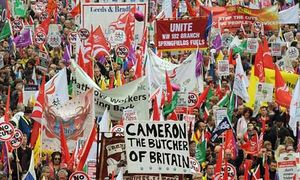 Protesters at the March for the Alternative.

For 26 March the protests, the Trades Union Congress (TUC) estimated that over 100,000 people would attend a event in لندن that day. The police stated that the TUC were "very professional, very well prepared" with the march.[3] The TUC have urged protesters to keep peace, but several have threatened to riot and occupy buildings.[4] [5] The demonstrations included a variety of participating organizations, such as the Lewisham Pensioners' Forum and the Latin American Women's Rights Service for example.[1]

The TUC argued that the spending cuts were entirely unnecessary, being a product of the government's right wing ideology rather than actual need. Starting at Thames Embankment, the protest march led down to Hyde Park, where a rally took place, with the TUC general secretary Brendan Barber and Labour Party leader Ed Milliband addressing the assembled crowds. Several independent protesting groups moved from the main TUC march further north into Soho and Oxford Street, where some committed acts of vandalism and got into clashes with riot police. Their actions were denounced by both the Metropolitan Police and the trade unionists responsible for organising the main march.

The marches began around ten in the morning, and would be highlighted by an address in Hyde Park by Opposition Leader Ed Milliband. Estimates of the crowed varied between two and four hundred thousand people. [6][7] To prevent the feared rioting, which did to some extent take place, around 4,500 police officers were on duty, with the human rights group Liberty sending 100 legal observers to monitor their actions.

At the Hyde Park rally, Barber told the crowds that "We are here to send a message to the government that we are strong and united... We will fight the savage cuts and we will not let them destroy peoples' services, jobs and lives."[8] Amongst those joining the march were members of a variety of different sectors in society, including teachers, nurses, midwives, council and other public sector workers, as well as pensioners, students and direct action supporters.[9][10] Eight hundred coaches and 10 special trains were put on to carry the protestors to London.[11] with demand for transport being so high that some of those wishing to travel to London for the protest were unable to do so.[9] The numbers attending the rally were significantly higher than the TUC's initial estimate of a hundred thousand people.[12] Some families brought their children along with them on the protest, whilst performances were given by steel bands, choirs and dancers.[3] Barber was followed by Ed Milliband, the leader of the Labour Party, the current opposition in the United Kingdom parliament. Miliband remarked that "The Tories [i.e. Conservatives] said I should not come and speak today. But I am proud to stand with you. There is an alternative."[8] He went on to criticise the manner in which the Conservatives and Liberal Democrats instituted the cuts, issuing a message to David Cameron that "you wanted to create the big society – this is the big society. The big society united against what your government is doing to our country. We stand today not as the minority, but as the voice of the mainstream majority in this country."[3] When Milliband stated that certain cuts to the public sector were in his opinion necessary, he was heckled and booed by members of the crowd, although on the whole his speech was well received by the audience.[3]

As the event's began, the official segment of the demonstration stretched back one and a half miles from Embankment tube station to St Paul's Cathedral.[1]

A small segment of violent black bloc anarchists, estimated at around 150 to 300 people, took the opportunity to attack various businesses and salespeople. They threw flares and paint, smashed windows, hit people and objects with banner poles, and setting off fires. Targets included Topman in Oxford Street, Ann Summers in Soho, the Ritz Hotel in Mayfair, Lloyds TSB bank on Piccadilly, Niketown shop in Oxford Circus, the Next in New Bond Street, Fortum & Mason on Piccadilly, an HSBC bank at Cambridge Circus, and a Royal Bank of Scotland branch.[1]

Rioters trapped a woman in a Jermyn Street theatre as the nearby buildings burned; she made it out safely. The militants also petered police officers with lightbulbs filled with ammonia. The rioters, many of them members of the group UK Uncut and the Socialist Workers Party, were unconnected with the vast majority of peaceful demonstrators.[1]

Further outbreaks of violence were reported in London on 27 March. Several hundred people protested in Barker's Pool, Sheffield; the branch of John Lewis was damaged by rioters throwing smoke bombs and rocks.

A YouGov poll published Saturday, 26 March 2011 found that a 52% majority supported protests "to campaign against public sector spending cuts" while 31% expressed opposition. The results contained a strong partisan divide, with 83% of Labour supporters and only 19% of Tory supporters backing the protests. YouGov had surveyed 2,720 adults online between 20-21 March 2011.[13]

Education Secretary Michael Gove said on BBC's Radio 4 Today on early 26 March morning, "Of course people will feel a sense of disquiet, in some cases anger, at what they see happening, but the difficulty we have as the Government inheriting a terrible economic mess, is that we have to take steps to bring the public finances back into balance." He also speculated that the march could "move from being [a] family event into being something darker".[1]

Daniel Hannan, a journalist and the Conservative MEP for South East England, stated that the protesters "have decided to indulge their penchant for empty, futile, self-righteous indignation." He wrote, "After “No Cuts!” the marchers’ favourite slogan was “Fairness!” Alright, then... How about being fair to our children, whom we have freighted with a debt unprecedented in peacetime?"[14]

Deputy Prime Minister Nick Clegg told Reuters news service, "If I was a demonstrator in London, I would be furious with the Labour leadership, because they are whipping up people's fervour and they are being utterly dishonest... We have an opposition party that has retreated into the worst kind of infantile opposition politics, which is to score lots of tactical points and not level with people about what they would do instead."[15]