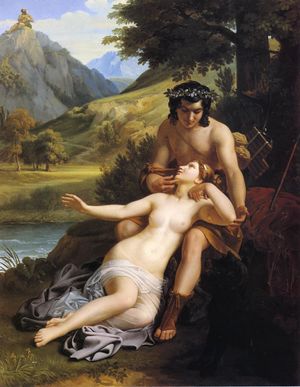 The Loves of Acis and Galatea by Alexandre Charles Guillemot (1827)

Acis and Galatea is a story from Greek mythology that originally appeared in Ovid's Metamorphoses. The story tells of the love between the mortal Acis and the Nereid (sea-nymph) Galatea; when the jealous Cyclops Polyphemus kills Acis, Galatea transforms her lover into an immortal river spirit. The episode was made the subject of poems, operas, paintings, and statues in the Renaissance and after.

Galatea (Γαλάτεια; "she who is milk-white"), daughter of Nereus and Doris, was a sea-nymph anciently attested in the work of both Homer and Hesiod, where she is described as the fairest and most beloved of the 50 Nereids.[1] In Ovid's Metamorphoses she appears as the beloved of Acis, the son of Faunus and the river-nymph Symaethis, daughter of the River Symaethus. When a jealous rival, the Sicilian Cyclops Polyphemus, killed him with a boulder, Galatea then turned his blood into the Sicilian River Acis, of which he became the spirit.[2] This version of the tale occurs nowhere earlier and may be a fiction invented by Ovid, "suggested by the manner in which the little river springs forth from under a rock".[3] According to Athenaeus, ca 200 CE,[4] the story was first concocted by Philoxenus of Cythera as a political satire against the Sicilian tyrant Dionysius I of Syracuse, whose favourite concubine, Galatea, shared her name with the nymph. Others claim the story was invented to explain the presence of a shrine dedicated to Galatea on Mount Etna.[5] 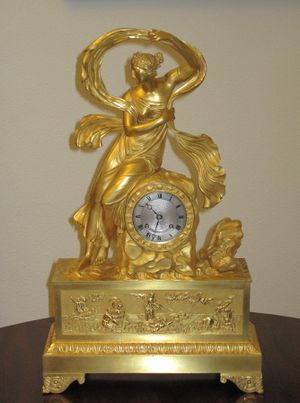 An 1822 French Empire mantel clock depicting Galatea. The design on its frieze is based on Rafael's fresco

This article incorporates text from the public domain Dictionary of Greek and Roman Biography and Mythology by William Smith (1867).