تعلم في Repton School,[1] Wauchope was commissioned into the Argyll and Sutherland Highlanders in 1893.[2] He transferred to the 2 Battalion Black Watch في يناير 1896,[2] was promoted to lieutenant on 3 August 1898, and to captain on 30 October 1901.

He served in the Second Boer War in South Africa from 1899, and took part in operations in Cape Colony, south of Orange River. British forces advancing north from the Cape to relieve the town of Kimberley, which was sieged by Boer forces, met heavy resistance in the Battle of Magersfontein on 11 December 1899. Wauchope was severely wounded in the battle, and was later mentioned in despatches and appointed a Companion of the Distinguished Service Order (DSO) for his services.

In April 1902 he was seconded for a Staff appointment,[3] as an extra Aide de camp to Sir Walter Hely-Hutchinson, Governor and Commander-in-Chief of the Cape Colony.[4]

He served in World War I as Commanding Officer of 2 Bn Black Watch in France and Mesopotamia. After the War he joined 2nd Silesian Brigade, part of the British Upper Silesian Force, in Germany.[2] He became Military Member of an Overseas Delegation to Australia and New Zealand in 1923 and then Chief of the British Section of the Military Inter-Allied Commission of Control for Berlin in 1924.[2] He was appointed General Officer Commanding 44th (Home Counties) Infantry Division in 1927 and GOC Northern Ireland District في 1929.[2] 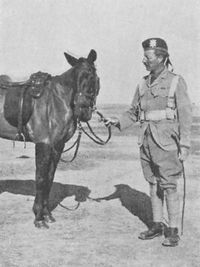 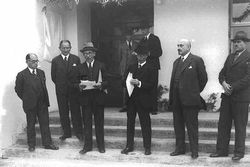 His last appointment was as High Commissioner and Commander-in-Chief for Palestine and Trans-Jordan in 1931.[2] Wauchope's administration was generally sympathetic to Zionist aspirations. By 1941 the former chief immigration officer for the Mandate, Albert Montefiore Hyamson, could write in his book Palestine: A Policy that "the first four years of his [Wauchope's] term were the heyday of Zionist history in Palestine." Not only did immigration go up threefold (the Jewish population increased from 174,606 to 329,358), but Jews also increased their land holdings (in 1931 they increased their land holdings by 18,585 dunams or 4,646 acres, while in 1935 they increased them by 72,905), and finally Jewish business and commerce enjoyed an economic boom.[5] He also promoted public works and civil engineering schemes but was regarded as lax at the early stages of the Arab rebellion.[1] He retired in 1938.[2]

Wauchope High Commissioner considered the most popular on the community and the Zionist movement . Wauchope time of increased immigration considerably when Wauchope conducted a policy of issuing certificates for many in what is considered the maximum absorption capacity of the country [11] . During his tenure occurred in the Fifth Aliyah , which has more than doubled the number of Jews in Israel and is led to the development of economic and cultural importance in the community. He made contact with community leaders and with leaders of the Arabs . Support the increase stemmed from a recognition that the immigration of Jews to Israel contributes to the economic development of the country. Wauchope initiated public works and engineering led to the advancement of the Land of Israel. Immigrant absorption capacity improved.

The appointment of Wauchope is considered from the outset as a step intended to accommodate grades and dull the results of the Passfield White Paper . David Ben-Gurion wrote to the British Prime Minister, Ramsay MacDonald , considered a Zionist sympathizer, told him he was going to take care It means "New White Paper cancel the negative content and new high commissioner is appointed, Wauchope, which will be to the right of immigration and settlement [12] . Wauchope Although he declared in 1932, appearing before the Mandates Commission of the League of Nations , the intention to establish a legislative council for the residents of the Land of Israel , which appeared in the Passfield White Paper , not abandoned, to the dismay of the Zionist camp, because the Jews were a minority in Israel, but in reality the idea is not previous. Legislative Council idea came up again at the end of 1935, but under pressure from Chaim Weizmann was rejected by the British Parliament and the House of Lords [13] .

Arthur Wauchope won the highly esteemed by Jews, who have the important events as the opening of Levant , and promised to call on his name to one of the bridges over the Yarkon River . Even Independence Square in Netanya was named after him between 1936 to 1947 . Yitzhak Ben-Zvi wrote:

"The community will remember the deceased Sir Arthur Wauchope twenty hundred thousand Jews who immigrated to Israel during his reign and help. We will not forget his position favorable agricultural settlements in Hebrew and development of Tel Aviv and a license to develop its harbor ; the attitude to the institutions of our culture, such as the stage , the orchestra, etc." [10] .