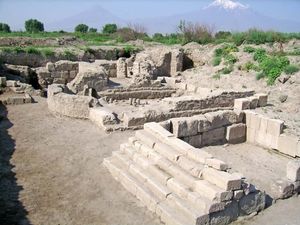 Artashat (بالأرمينية: Արտաշատ); Hellenized as Artaxata (باليونانية: Ἀρτάξατα), was a large commercial city and the capital of ancient Armenia during the reign of king Artaxias I; the founder of the Artaxiad Dynasty of the ancient Kingdom of Armenia. The name of the city is derived from Iranian languages and means the "joy of Arta".[1][2] Founded by King Artaxias I in 176 BC, Artaxata served as the capital of the Kingdom of Armenia from 185 BC until 120 AD, and was known as the "Vostan Hayots" ("court/seal of the Armenians").[2]

King Artashes I founded Artashat in 176 BC in the Vostan Hayots canton within the historical province of Ayrarat, at the point where Araks river was joined by Metsamor river during that ancient eras, near the heights of Khor Virap. The story of the foundation is given by the Armenian historian Movses Khorenatsi of the fifth century: "Artashes traveled to the location of the confluence of the Yeraskh and Metsamor [rivers] and taking a liking to the position of the hills [adjacent to Mount Ararat], he chose it as the location of his new city, naming it after himself."[3] According to the accounts given by Greek historians Plutarch and Strabo, Artashat is said to have been chosen and developed on the advice of the Carthaginian general Hannibal:

It is said that Hannibal the Carthaginian, after Antiochus had been conquered by the Romans, left him and went to Artaxias the Armenian, to whom he gave many excellent suggestions and instructions. For instance, observing that a section of the country which had the greatest natural advantages and attractions was lying idle and neglected, he drew up a plan for a city there, and then brought Artaxias [Artashes] to the place and showed him its possibilities, and urged him to undertake the building. The king was delighted, and begged Hannibal to superintend the work himself, whereupon a very great and beautiful city arose there, which was named after the king, and proclaimed the capital of Armenia.[4]

However, modern historians argue that there is no direct evidence to support the above.[5] Some sources have also indicated that Artashes built his city upon the remains of an old Urartian settlement.[1] Strabo and Plutarch describe Artashat as a large and beautiful city and call it the "Armenian Carthage".[1] A focal point of Hellenistic culture, Armenia's first theatre was built here.[2] Movses Khorenatsi points that in addition to numerous copper pagan statues of the gods and goddesses of Anahit, Artemis and Tir brought from the religious center of Bagaran and other regions to the city, Jews from the former Armenian capital of Armavir were relocated to Artashat.[6]

Artashes also built a citadel (which was later named Khor Virap and gained prominence as the location where Gregory the Illuminator was to be imprisoned by Tiridates III of Armenia aka Trdat the Great) and added other fortifications, including a moat.[7] Given the city's strategic position on the Araks valley, Artashat soon became a center of bustling economic activity and thriving international trade, linking Persia and Mesopotamia with the Caucasus and Asia Minor. Its economic wealth can be gauged in the numerous bathhouses, markets, workshops administrative buildings that sprang up during the reign of Artashes I. The city had its own treasury and customs. The amphitheater of Artashat was built during the reign of king Artavasdes II (55-34 BC). The remains of the huge walls surrounding the city built by King Artashes I could be found in the area.

Model of the Acropolis of Artaxata

An attempt to restore the temple of Tir Apollo to Artaxata, located in the lower town, near the Aras river

During the reign of Tigranes II, the Armenian kingdom expanded and conquered many territories in the south and west, ultimately reaching the Mediterranean Sea. Due to the remoteness of Artashat in the greater context of the empire, Tigranes built a new capital called Tigranocerta. However, in 69 the Roman general Lucullus invaded Armenia, defeated Tigranes' forces at the outskirts of Tigranocerta, and sacked the new capital. As the harassed Roman forces continued to move northeast in pursuit of the Armenian king, a second prominent battle took place, this time at Artashat where, according to Roman sources, Tigranes II was defeated once again. Artashat was restored as capital of Armenia in 60 B.C.

However, the city remained a hotly contested military target for the next two centuries. It was occupied by Capadocian legions under the Roman general Gnaeus Domitius Corbulo, who razed it to the ground in 59 AD as part of the first, short-lived, Roman conquest of Armenia. After Emperor Nero recognized Tiridates I as king of Armenia in 66, he granted him 50 million sesterces and sent architects and construction experts to help in the reconstruction of the ruined city.[2] The city was temporarily renamed Neronia, in honor of its sponsor, Nero. 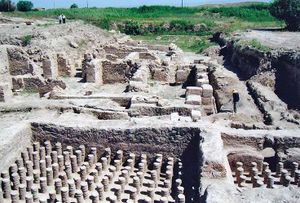 Artashat remained the capital of Armenia until 120 when the see of power was moved to Vagharshapat during the reign of Vologases I (Vagharsh I) 117/8–144. After his death, the Romans led by Statius Priscus invaded Armenia and destroyed Artashat in 162 A.D. Archaeological excavations conducted during the Soviet era uncovered a Latin inscription bearing the full titles of the Emperor Trajan that was probably inscribed upon the governor's palace, dating back to the first quarter of the second century.[2] Artashat remained one of the principal political and cultural centres of Armenia until 369 when it was thoroughly destroyed by the Sassanid Persian invading army of king Shapur II.

In 449, just prior to the Battle of Avarayr, the city witnessed the gathering of the Artashat Council, where the political and religious leaders of Christian Armenia gathered to discuss the threats of the Sassanid king Yazdegerd II. However, after losing its status as a capital to Vagharshapat and later Dvin, Artashat gradually lost its significance.

The exact location of ancient Artashat was identified during the 1920s, with archaeological excavations beginning in 1970. The archaeological site is 8 kiloمترs (5.0 ميل) south of the modern city of Artashat, near the monastery of Khor Virap.

The modern town of Artashat was founded by the Soviet government in 1945, 8 km northwest of the ancient city, within the Armenian SSR. It was given the status of an urban community with the merge of three villages, Upper Ghamarlu, Lower Ghamarlu and Narvezlu.[1]

The town has grown gradually as an industrial hub during the Soviet period, mainly in the sphere of food-processing and building materials production.

In 1995, with the new law of the territorial administration of the Republic of Armenia, Artashat became the provincial centre of the newly created Ararat Province.